The Channel: An unnecessary barrier to Cycling

Last weekend I took my bicycle the very short distance to Abbeville, Picardie for the Ronde Picarde, a cyclosportive of the very highest quality which makes a great late season ride.

This is a very easy journey to make in a car.  Throw the bike in the back, drive to the channel and one hour on the motorway the other side.  However this year I decided to go by bicycle.  I imagined it would be equally easy, or even easier.  Ride to the tunnel, hop on a train, ride out the other end and hop on another train.

However it turned out to be surprisingly difficult.

First if you wish to take your bicycle on the Eurotunnel, it has to go in a motor vehicle.  If you do not supply your own motor vehicle then Eurotunnel will provide one for you, picking you up and dropping you off at points remote from the tunnel itself.  So far so (just) bearable.   However this service has to be booked in advance and is provided only twice a day: once in the early morning and once in the late afternoon, both times hopeless for me.

I imagine some health and safety assessment has defined cycling to a train as dangerous; perhaps because there are loads of motor vehicles about that might run a cyclist over.  What would the consequences be if Eurotunnel were to conduct a health and safety assessment at Elephant and Castle, I wonder?  At least at their terminals, they can impose speed limits and traffic calming where necessary and let cyclists onto trains first.  There is plenty of space at the front of trains for bicycles, I have seen it. 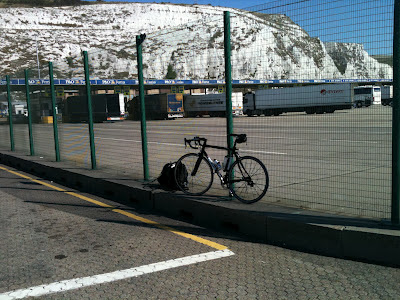 So, the ferry it was.  However I was denied a ticket on DFDs  with half an hour to go before the advertised sailing time.  How long can it take to ride a bicycle onto a ferry?  I had to go on a later P&O ferry and pay £25 one way (which seemed to me steep given that the costs for a car is advertised at starting from £19 one way.)

At least the Port of Dover does not worry about cyclists mixing with 'real traffic'.  Getting on the ferry was easy, I was let on first with the motorcycles.  Getting off the P&O ferry in Calais was, however, far more frustrating.  Whilst the motorcyclists were let off first a grumpy man yelled at me "You!  Stay there!  They will run you down!." and with that I had to wait on a fume choked car deck fro 20 minutes while every last motor vehicle got off and I missed a train running out of Calais Ville.  Why anybody would run me down on an exit ramp from a ferry baffles me.  Impose a 20 mph speed limit if this is a real concern.

Once in France taking the bicycle on the train was easy

Very few people take a bicycle across the Channel; far more take them on the back of cars.  Now I understand why.

Still the Ronde Picarde was wonderful as always and well worth the hassle of getting there.

What a pity though that there is not a cycle track through the service tunnel of the Channel Tunnel.  It would be much faster than the ferry.  Still I expect some Health and Safety assessment would rule that idea out.
Posted by Martin Porter at 10:15