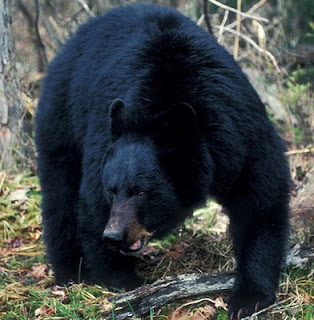 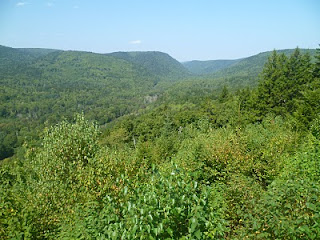 The Mail Must Get Through 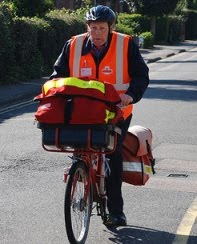 My post arrives at home delivered by a postman on a bicycle.  He has always seemed very happy with his job and shows a healthy interest if I happen to be tinkering in the garage with one or other of my bikes on a Saturday morning when he arrives.  Certainly if I were a postman I would very much rather deliver on a bicycle then by van or by cart.  It is a very great shame that the outgoing chief executive of the Post Office, Mr Crozier, called time on the delivering of mail by posties on bicycles.  His replacement, Ms Greene, is under some pressure to reverse this decision.
Ms Greene is moving across the Atlantic having previously headed the Canadian postal service.  I happen to be writing this post in Canada and am having an opportunity to observe first hand a culture more motor-centric even than our own.  Infrastructure is quite unambiguously devoted to the private motor car.  Only the very hardy few cycle here.  Postal delivery through the letterbox has, save perhaps in some city-centres, been abandoned for van drops into multiple mailboxes on street corners, in the suburbs, or has to be collected by the customer (almost invariably by car) from the village post office, in rural areas.  The elderly and disabled are reliant upon friends, neighbours or relatives to go and pick up their post for them.
The internet has of course transformed the postal service everywhere.  It is rare now that I write a letter to a friend or relative or send a cheque through the mail.  E-mail and internet banking have done away with the need for all that.  Instead I order a lot of goods over the internet and rely upon my postie to deliver parcels of books, bike parts and electronics to my door.  This can, though, still be done by bicycle using cargo bikes or even tricycles where necessary.
Mr Crozier has justified his decision by refering to Health and Safety considerations but this is perplexing.  Posties will be healthier delivering on a bicycle and cyclists will be safer with fewer vans on the streets; witness my close shave with a Post Office van last month.
CTC have launched a campaign to seek to persuade Ms Greene to reverse Mr Crozier's decision.  This campaign has my support.
The Canadian postal service is not, I think, one to emulate.
Posted by Martin Porter at 15:28 3 comments: