Why are those who assault cyclists not usually prosecuted

There has been some publicity recently over the failure of the West Midlands Police and the CPS to prosecute the charmless man who was filmed assaulting Stephen Perrin.  The story has made it into the redtop newspapers and the broadsheets.  The assailant was not even, contrary to some of the reports I have seen, cautioned for assault since his victim reluctantly accepted 'local resolution' when told by the Police that there was no prospect of the thug being prosecuted.  (His identity has not been released so I shall call him 'the thug').  That means he has no criminal record and, the next time he does this, will be eligible for a caution under the rules which the West Midlands police have applied to this case.

In response to Stan Fichele's comment on twitter, retweeted by Chris Boardman, saying that there is a lot to do to get Britain Cycling when the police think it is OK not to prosecute/warn the thug, West Midlands Police referred to their press release which (to my mind) rather glosses over the fact that the victim wanted a prosecution.  Reference is made to Home Office Guidelines which mean, they claim  that 'the offence would not have been put before the Courts'.  The victim is reported to have accepted from the police that they (the police) were not to blame because of the government guidance.

These guidelines are the same ones that I was told meant that Timothy Denman could not be prosecuted for assaulting me in December 2010.  I wrote to my MP and to the Home Secretary about the application of this guidance but got nowhere with responsibility being shunted back and forth between the Home Office and Lord Chancellor's Department.  Subsequently there has been a promised review of the cautioning of offenders and, very recently, some embarrassment now that it has come to light how frequently the police settle for 'local resolution' in cases of violence (see today's BBC news.)

I fear there is a strong element of our law enforcement authorities seeking to do as little as possible whilst at the same time bombarding us with press releases and twitter feeds designed to reassure us that they are doing much and, indeed, everything they can.

The Home Office Guidelines that are said to tie everybody's hands are the Gravity Factors Matrix which ACPO drew up in consultation with the CPS but which are not openly available.  A Criminal Justice Service booklet compiled by the MoJ/Home Office and CPS expressly refers to the ACPO Gravity Factors Matrix under the rather important question of 'offence suitability'.  Certainly these guidelines require much greater scrutiny than they receive.  It is all too easy for those deciding not to prosecute to rely upon guidance that 'outsiders' know nothing about.

When I complained about Denman's caution to the Thames Valley Police, I was shown a copy of the guidance by the Inspector who came around  to my home to apologise.  It was very similar to the Matrix used for Young Offenders which Kent Police have made available for download here.  From this it can be seen that an assault occasioning actual bodily harm (bodily harm that is not trivial) gets 3 points.  If there is any aggravating factor then (unless balanced by a mitigating factor) the score gets to the 4 which should 'normally' result in a charge.  The way then to get around the inconvenience of having to charge somebody is to say that an assault which in fact occasioned ABH should actually be treated as a common assault which scores only 2 and so (under the counting system as I understand it) cannot get to the magic 4.

Such a mechanistic system is bizarre and bound to lead to unacceptable results.  That is why the Police and CPS are at perfect liberty to depart from it when they feel the circumstances warrant it.  The Matrix itself confirms that:

15.2 Discretion does exist to deviate from the normal response, as indicated above, but only if the circumstances justify this, and the reasons for such action would need to be fully recorded by the decision maker.

For example as I pointed out in 2011, a leaked police document indicated that no person had been cautioned for offences arising out of the inner city riots notwithstanding the fact that many of the offenders arrested would have qualified for a caution under the Matrix.  Equally Hate Crimes involving assault are singled out as meriting an award of 4 and therefore likely prosecution.

There is a simple answer here.  The Government wishes to encourage cycling in furtherance of the public interest.  Assaulting a cyclist because he is on a bicycle should be characterised as a 'hate crime' and should result in prosecution.  I fully recognise that there are issues of choice here that distinguish race, gender and sexual orientation from transport choice but the evil of being attacked for what you are and what you represent goes beyond these factors to cyclists, 'Goths' and transvestites (and quite possibly others).  Let us label them all 'hate crimes', get ourselves away from the absurd and discredited Gravity Factors Matrix and get prosecuting.  Where the Police and/or CPS decide not to prosecute they should be required to explain why not without vague reference to guidelines that are too often used as a excuse designed to be incomprehensible to the victim.

If you enjoy this blog (and even if you did not), please consider supporting Roadpeace by sponsoring my Team Townend Ride at Justgiving.  I have reached 25% of my target and will match your contribution (up to a total of £250).  We need a charity complaining about the state of our Criminal Justice System.

I had a great day yesterday in the Lake District taking part in the Team Townend Pushbike Challenge ridden in memory of Christian and Niggy Townend, brothers killed in a double tragedy in December 2010 when a coach was driven into them.  Last year, I had to report here, the acquittal of the coach driver of all charges against him and I felt it important to support this ride. 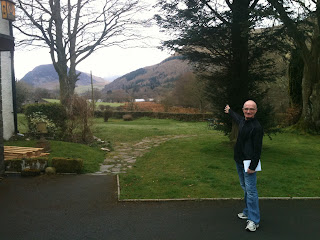 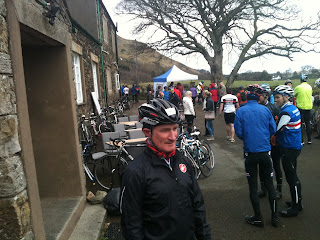 At the start, nearly ready to go
It was a real pleasure to meet several members of Christian and Niggy's family.  The sun shone almost throughout, and the friendliness and generosity of all involved was quite exceptional.  Lovely home made chocolate biscuits alongside the bananas at the feed half way around and an enormous spread of homemade/prepared food to welcome us at the finish.  I thoroughly enjoyed the day and am now the proud owner of a Team Townend jersey.
For the local news report click here.
The ride supports the Charity roadpeace whose sterling work includes lobbying to improve the criminal justice process after vulnerable road users have been killed or harmed.  They really do deserve our full support. 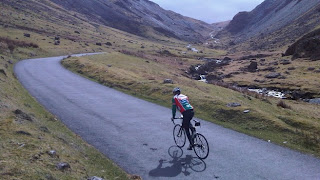 Honister Pass looms ahead
Do please consider sponsoring my ride, which can easily be done at justgiving.  To encourage you along I shall match your contribution (up to a total of £250 - in case Bill Gates is reading!) 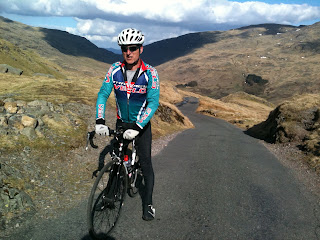 Me - in the Lakes (Hardknott)

The All Party Parliamentary Cycling Group Report is now available.  I recommend reading the summary.  The full report sets out many of the representations made at the Inquiry before coming to those recommendations which the Group is making.
These recommendations are all sensible, moderate and achievable yet with the potential to effect a profound improvement for cyclists and the attractiveness of cycling.  I am hopeful that Government will find these proposals irresistible.  It calls for modest amounts of money  for cycling (starting at just £10/head which could surely be afforded given the savings in many departments that an increase in cycling would entail), designing roads and communities with cyclists in mind, appropriate speed limits, HGV design and control,  adequate law enforcement, training, education and political leadership.
There is so much sense in all this that I do urge you to take a moment, right now, to support this petition.
Posted by Martin Porter at 11:59 1 comment:

Dangerous or Careless - An Update

I now have a letter (here and here) from an Acting Deputy Chief Crown Prosecutor which essentially reiterates the rejection of my complaint by the District Crown Prosecutor.  The Acting Deputy Chief says that 'there is no evidence that Mr Stead's error of judgment was so substantial that it caused the driving to be dangerous'.  So there is now a total of 4 prosecutors who do not appear to recognise that attempting an overtake that could not be carried out safely and failing to have a safe and proper regard for vulnerable road users are not merely evidence of dangerous driving but are 'likely to be characterised as dangerous driving' according to their own guidance.

There is no explanation from the CPS as to when an 'error of judgment' (nice comforting description of bad driving) is 'so substantial' (big, big hurdle implied) that it causes driving to be dangerous.  Even directed specifically to their own guidance, drafted in large part to deal with undercharging, the CPS en bloc substitute their own motor-centric ideas of 'errors of judgment' needing to be 'so substantial' etc.  This was not a case of momentary inattention or distraction, Mr Stead chose to try to pass me on my bicycle with his very massive HGV on a narrow road when traffic was coming the other way.  It was a deliberate act.

It will not surprise you that I am not happy with this letter and have now written to the DPP here
Posted by Martin Porter at 18:07 23 comments: