I do not consider myself to be a complaining type, but I have eventually got around to writing to the Chief Executives of AXA Insurance and Tellings Golden Miller, the Metropolitan Police Commissioner and the Chief Constable of Surrey.  The Chief Executives are of companies to whom I sent video clips of poor employee driving.  The policemen are the heads of police forces who have set up websites for reporting bad driving and ignored my reports, all made in a fit of enthusiasm when I started filming in July.
For good measure I have added an email today to Europlant Group (though I have not got to the Chief Executive stage with them yet) as I did not like this. 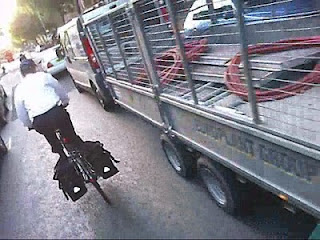 All the various clips are posted on youtube
It is dispiriting, though I suppose not desperately surprising, that only Royal Mail responded first time around; credit to them for that.
Posted by Martin Porter at 21:31 3 comments: 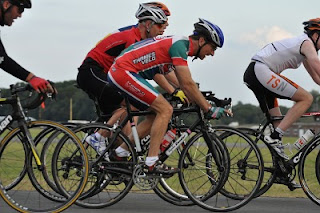 Dunsfold Park where I got one precious point
﻿
With the nights drawing in, all evening racing now a distant memory and the season winding down, it is time to review my third season racing.  I mentioned in an earlier post that I had finally found some modest form in June, though I wondered then if it would be a flash in the pan.  To be honest I believe it was and after the distraction of the etape and then a long period away with only occasional leisurely riding of a mountain bike, I returned to a race circuit significantly weaker in September than I had left one in early August.  Nevertheless the points I got in high summer were not wasted as I collected a rather lucky eighth place at Thorney Island last Sunday.
The result is that I got the ten points this season to leave the fourth cats for the thirds.  I am not at all sure how I will handle the stiffer competition of 3rd cat races; I intend to post what happens in the next Winter Series.  I hardly have an impressive palmares.  It can be seen that I have raced and raced and done rather poorly in all but a handful of them.  I hope this may encourage somebody out there to give racing a go.  To misquote Mark Twain you will not regret it if you remain upright and it does provide a whole new dimension to riding a bike.  It helps, of course, to be young and strong but I am living proof that you can get something out of it if you are neither.
My aim for the winter is to train myself to sprint, not an easy thing to work on during a London commute so I am just going to have to introduce myself to the concept of a training ride or even (I thought I would never say it) a turbotrainer.
Posted by Martin Porter at 18:24 No comments:

No more bears, black flies and stupefying heat for me for a while.  My first commute for a long while was last Thursday.  Unhappily skip lorries kill cyclists in hugely disproportionate numbers.  If you are killed in London it is very likely to be by a skip lorry.  This overtake was unacceptably close and also completely pointless.
Posted by Martin Porter at 14:06 5 comments: