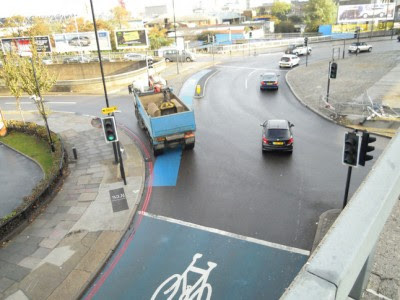 I write this in  a purely personal capacity as a London bike commuter, though naturally I could not fail to be profoundly moved by my experience in representing the family of Brian Dorling who died so tragically and unnecessarily at the Bow Roundabout shortly after the blue paint of CSH 2 was laid in 2011 and furthermore, in following the recent inquest into the death of Philippine De Gerin-Ricard at Aldgate last July.

I agree with the Mayor that Cycle Super Highways have a future.  However this is with the important proviso that their designers have a good understanding of how cyclists safely integrate with traffic where segregation is not achievable (or rather not achieved).  Current design, typified by a 1.5 m strip of paint of no legal significance, encourages cyclists towards an unsafe position too far to the left.  This both conflicts with the ‘Bikeability’ training that TfL itself rightly seeks to encourage and reinforces the mistaken views held by some motorists as to where cyclists should be.

It is telling, and confirms what I have long suspected, that cycle infrastructure designers, and even those at the top at TfL pushing cycle training for others, do not see the need for Bikeability training for themselves.  Their designs demonstrate that they do not understand, for example, that approaching a roundabout to go straight ahead the cyclist is best advised to position herself well to the right of the leftmost lane (especially of course if there is a high volume of left turning traffic). When given advice by a very knowledgeable police officer who understands safe cycle positioning, it is all too easy for the untrained designer to consider this is a matter on which their opinion is as good as anybody else's.

Personally I do not buy the argument that putting down paint is a useful indication to motor traffic that cyclists may be present.  Any driver, especially in London but also elsewhere, is criminally negligent if he does not  consider the likely presence of cyclists on any highway.  Are we implying that where there is no blue paint drivers are not obliged to consider the likely presence of cyclists?

For the encouragement of the broadest possible mix of people the focus has to be on (optional) segregated routes of the highest quality, as recognised in the Mayor’s ‘Vision for Cycling’ published in March.  Using paint to lead cyclists directly towards segregated areas without regard to how they integrate most safely with traffic on their way there must be avoided.  Indeed there is a very great deal to be said for not marking the road at all where cyclists need to integrate with motorists.  Many (indeed the majority) of cyclists crossing the Bow junction do so on the elevated flyover where there is no cycle infrastructure, recognising that it is not only faster but safer than the provision below.  It is so easy to make matters worse and the Mayor needs to be held to his word to do cycling infrastructure properly or not at all.


I do not doubt the Mayor and TfL’s sincerity in wishing to make London safer and more attractive for cycling.  I applaud them for some good progress towards HGV safety (sadly too often neglected by others).  I trust that by the end of the Mayor’s second term we will be able to look back and see that he really did take valid criticisms of his project to heart.
Posted by Martin Porter at 10:44 16 comments:

Why am I hopeful?