Another bright sunny but cold day (5ºC) with a blustery west wind.  The long shadows even at 1pm served as a reminder that we are close to the shortest day.  After last week's experience we started with a lecture on safe riding but I am afraid there were crashes in both the 3rd and 4th cat races again.  The one in the 3rd cat race unfolded before my eyes on the short uphill section between the right hand and left hand bends.  Started as a wobble near the front and got amplified so that the rider a few back had nowhere to go but the grass where I believe he at least got a soft landing.  The woman in the 4th cat race [correction: I see from Lucy's report she was in our race, I had not noticed] was not so fortunate and was lying on the circuit for several of our laps.  I hope she is ok.
The racing seemed fast today.  Again we did not catch the 4th cats, but at least they did not catch us either.  There were some spirited breaks and we were lined out at several points as the pace increased to get them back.  A good race though not for me personally.  I punctured with one and a half laps to go.  I now take spare wheels with me but you cannot have a lap out to change your wheel with under 5 laps to go.  I fell rapidly off the back as my rear tyre deflated.  I had hoped there would be sufficient air left for me to finish the race but at half a lap to go I was onto the rims.  I was not going to ride my racing wheels on the rims so I walked the last half lap both to finish and to pick up my spare wheel at the hut.
My stats will be a bit out because of the puncture but from the start to when I started walking: .
52 mins at 23.8 mph, max 29.2mph.
I stayed to watch a teammate in the following E/1/2/3 race. 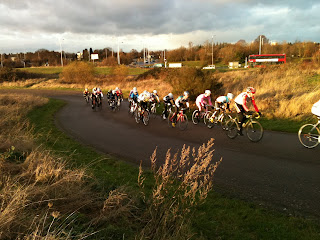 A bright sunny day with a much lighter wind than last week but also a lot cooler at 6ºC.  I felt a bit more comfortable in the bunch this week only at the back on the occasions that the pace picked right up.  We passed the 4ths(or most of them) a couple of times today but on their penultimate lap, half a dozen or so of them passed us at the finish of their race, whilst at the same time they were lapping a substantial part of their own field.  We slowed to let them past and once their race finished the attacks in ours began.  Once again a small group got away n the final laps – Lucy’s report will have far more detail than I was able to observe.  At the bell I was at the back of the field and happy to stay there until we crossed the line.
Unhappily there was a crash in the 4th cat race, on the bend just before the clubhouse, and as I left the circuit two ambulances were there.  I hope those involved were not badly injured and recover soon.
Stats: 1h04m at av 24.9mph.  Max 30mph.
Posted by Martin Porter at 16:29 No comments:

Those of you who have been following this blog for a while may recall that I was assaulted on 12th December 2010 and that the following weekend the Thames Valley Police interviewed my assailant, one Timothy Denman of Charvil, and gave him a simple (police) caution for assault.

I have commenced proceedings for assault in the Slough County Court.  Denman has now served a Defence which reads as follows:

"The Claimant is abusing his power and traping (sic) people that (sic) drive car's (sic) he was pushed due to provicatien (sic) and criminal damadge (sic) caused by his friend then used abusive langue (sic)."

I will let you know how matters progress.
Posted by Martin Porter at 11:05 8 comments: 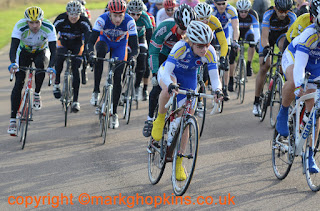 Courtesy Mark Hopkins who has some great shots
permission applied for.
A mild sunny winter's day with a stiff westerly breeze.  When I looked on the Imperial site this morning I saw the 4th cat race was fully booked so I grabbed one of the few remaining places in the 3rd cat race before they also went.  It is an indication of just how popular racing in general and the Imperial Winter Series in particular is.  There must be some WyndyMilla sponsorship as the pink flags were out and I am now the owner of a WyndyMilla bidon (always useful).
This was my first race for 4 months and it showed.  I sat in towards the back for most of the race.  A break of 6 got away entirely unnoticed by me and we alternated between the literally conversational and the fairly frantic.  We never did catch the 4th cats, who I think must have had an exceptionally fast race today.  Perhaps because it was all now about 7th place the gallop for the line started much later than usual and with half a lap to go we were free wheeling in a close packed group down the back straight.  I was happy just to hang on in there and come in with the bunch.
Stats: 1h05m at av 24.6 mph.  Max 29.7 mph.
Posted by Martin Porter at 20:40 1 comment: 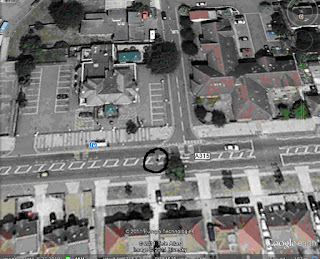 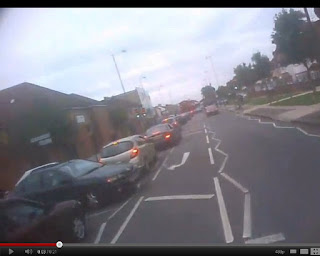 This is just about where I stop, just short of the zig-zags
Posted by Martin Porter at 10:21 9 comments:

Radio Berkshire's Andrew Peach Show had a discussion (about 0840) about cycling this morning.  The parents of a child, Stephen Millington, tragically killed while cycling near Basingstoke in 2007, have called for compulsory cycle training for motorists.
As I said to Andrew Peach, I think this is a good idea.  Motorists sometimes get upset with cyclists who do not follow the rules, but in my experience, just as often get upset (even aggressive and violent) with cyclists who are following the rules.  It would help if motorists at least knew what the rules are.
There would be an added bonus that many more adult cyclists would, in practice, then get cycle training without discouraging cycling.(i.e. it is a condition of driving not cycling).
I can see there would be resistance to introducing this but, as a start, it could at least be an option for those who would otherwise receive Fixed Penalty Notices for road traffic offences.  As I noted when I was with the Cycle Task Force of the Metropolitan Police last month, there are many options for police officers to offer cyclists training instead of a ticket, but in marginal cases with motorists they seem to get off with a warning.
So I am with the Millingtons on this.
Posted by Martin Porter at 08:48 6 comments: