With a bit of lucky timing at the Eurotunnel, we made it this year from home to the sign on in Abbeville in 3 ½ hours, which meant I got there at 1958 French time, 2 minutes before the advertised closing time. Tents were already being taken down, the guy checking the electronic tags had turned his laptop off and the bags of goodies had plainly run out. However I got the bare essentials minus sufficient ties for transponder and number, and headed west into a glorious sunset to the usual cabin by the golf-course.

There I assembled the bike, tied the number on using dental floss and inserted into my rear bottle carrier the sawn off tonic bottle which was all part of the plan to avoid last year’s disaster at the water station. 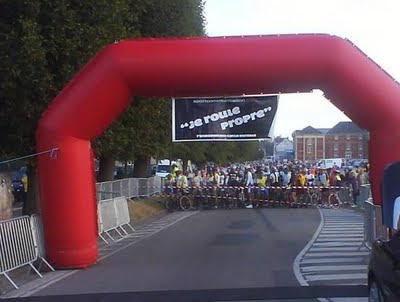 The following dawn saw me up having breakfast and going easy on the coffee in an attempt to avoid a stop behind a hedge later in the day. In the gathering light I made the 15 minute ride back to the start, caught up by part of a large group from the who had discovered Virginie’s accommodation. I got there with half an hour to spare – thus far things were going better than last year but it was not to last. My ranking in my category last year had secured me a place in the front start pen with a lot of ferociously fit looking racers. No need, it seemed to me, to worry about where in the front pen I started so I spent a bit of time looking about for my team-mate with no success, before settling into some idle conversation with some guys from Carlisle who did the 113 miles in under 5 hours last year.

At 0804 we set off for the mad dash out of Abbeville with the speed soon picking up to 30 mph as we blasted southeast. However as we reached the first roundabout outside Abbeville the riding became very hairy. The lead vehicles slowed to below the pace of the peleton and we all bunched up behind, with the foolhardy picking past the strong, my speed dropping from 32 mph to 12. Once past the roundabout the pace picked right up again. There was a high speed crash as we zoomed through Epagnette to Eaucourt. Then the sharp turns as we left the main road and the delay getting over the narrow bridge before we wound up again as we headed south towards where I had expected the first hill. However this year we diverted from the route of previous years and headed straight to Bellifountaine avoiding the worst of the hill and gradually separating out into large groups.

As we went south to Oisement a strong wind made itself apparent especially after we had crossed the motorway for the first time and headed northwest. The wind must have been heading somewhere out of the Northeast. The echelon spread left across the road, with the first handful of riders, and then strung out in a long line all on the far left. Fortunately there were motorcycles everywhere warning oncoming traffic to get off the road. The wind strengthened and riders desperately tried to get shelter from each other, which was the probable cause of a sudden crash right in the middle of the peleton alongside me.

Speed remained high and I hit 30mph again on the descent down to the seaside town of . The road surface was untypically poor and I had drifted towards the back on this descent. As I turned sharp right for the short 25% ascent out of the town, my way was blocked by cyclists trying to pick their way past a parked car that was obstructing much of the road. It was a real challenge not to stop or fall off and my Garmin records a speed of 3 mph. By the time I got to the top of the hill I was off the back-stupid really as that is what happened to me last year. So with 3 others we struggled into the powerful headwind, finally re-establishing contact with the bunch as they slowed for the roundabout at Hautebat. The 2 mile chase had worn me out though and I suffered for it soon.

Heading back to the coast we were back into a strong crosswind. Again there was a string of riders along the left side of the road. However close I was to the side of the road someone would come further to my left to try to take shelter from me. I couldn’t seem to find shelter for myself and gave up just before Cayeaux and headed through in a small group that had been shelled from the back. I was still struggling and at around St Valery, I decided to stop, pause behind a hedge to avoid the need for delay later on, and carry on at a gentle pace waiting for the next group.

The next group came by shortly before the bifurcation came up. This group was fine to begin with and I was even spending a fair bit of time at, or at least towards, the front of it. At the water sation my sawn off tonic bottle served its purpose well, I picked up two bottles one went into my makeshift holder, the other into my back pocket. There was welcome relief from the wind provided by the which sheltered us somewhat. However as we emerged from the forest the cross wind was back with a vengeance and I was struggling yet again. Shortly after Noyelles, when a hill combined with everything else, I got dropped for the second time.

I was on my own for nearly all the remaining 20 miles. I was passed by a pair doing a 2 up that involved riding side by side taking it in turns to be in the crosswind. As I got to the last hill I spied a large group behind and decided I would try and keep ahead of them. By now there was a tailwind so I time trailed back to the finish. 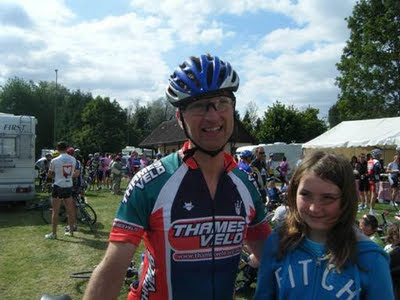 After the pasta, beer and chips at the finish, it was time to return to Virginie’s for the now customary 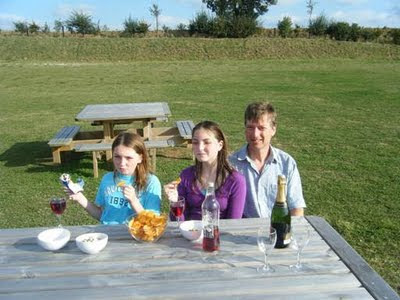 Total time this year was 05:42, good enough for Gold, but a disappointment after last year’s rather better performance. I came in 282nd, one hour behind the winner and 102nd in my age category. For the first time I had a slower time than the preceding year.

Still a great ride and as always thoroughly recommended.

Posted by Martin Porter at 20:17 No comments:

I do not cover my professional activities on these pages and have thus far avoided the question of helmets. However I have a letter in this week's Cycling Weekly responding to a call from another cyclist to 'wear your helmet'. It is one thing to hear this from a non cycling Judge (as to which I have vented my views in the New Law Journal and elsewhere, see http://www.newlawjournal.co.uk/nlj/content/personal-injury-blame-victim); I do worry though when cyclists themselves look to secondary and uncertain hope of injury reduction rather than the avoidance of accidents. I would like to see increased criminal penalties for those who speed, use mobile phones or drive carelessly/inconsiderately in the vicinity of a vulnerable road user. I say this as a cyclist rather than a lawyer but am all too aware of the lack of zeal often exhibited by prosecuting authorities in motoring cases.
Posted by Martin Porter at 16:17 No comments: 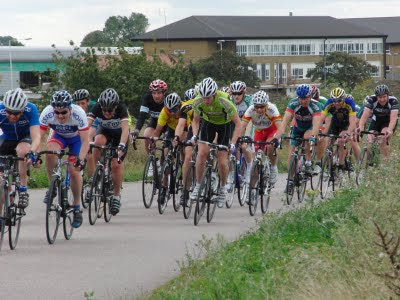 My club's turn at Hillingdon today so after a very inactive August I raced again. This week's crash was in the simultaneously run E/1/2/3 race and they were just picking themselves up as the 4th cat race came through. Had a few digs off the front but nothing lasted and the inevitable bunch sprint at the end is not for me. I finished in time to gawk in admiration at the two man leading break in the senior race containing my recent team mate, Harry Bulstrode, who chose our race to get the necessary points for Elite status. Tragically he punctured with 3 laps to go but still kept ahead of the chasing break of 5 to come in 2nd. One day I hope to emulate that with a break that works.
Posted by Martin Porter at 16:02 No comments: