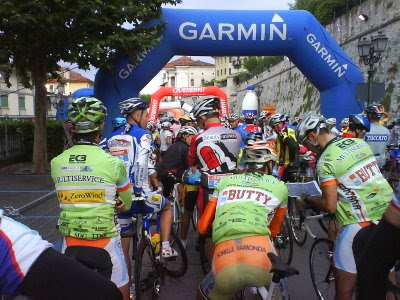 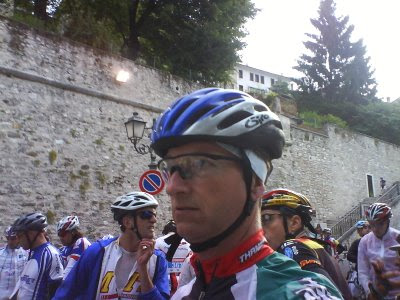 Just returned from Feltre in the Dolomites where I took part in the Gran Fondo which has just changed its name from Campagnolo to Sportful. Nothing else has changed though. In particular the 216km and 5,300m climbing route remains the same as last year. A tough day but with rewards in the form of fantastic views. I posted a fairly leisurely 10h54m but I am just not sufficiently practised at those very fast descents.
Posted by Martin Porter at 20:01 No comments:

A chance to put some long lumpy miles in on this attractive ride. Luckily the rain held off during the ride itself; there was plenty just before and just after. My 4th year at this and I had hoped to beat last year's 07:20. However I was beset by punctures today so way off. I did get to practice fixing punctures by the side of the road.
I read the debate about the value of cyclosportives in the cycling press with interest. My view is that anything that gets people out on bikes is good and there were certainly plenty for this impeccably planned event.
Posted by Martin Porter at 20:16 No comments:

Second time I have done this and I have enjoyed it hugely each time. The Kitsmead Lane road circuit is a short ride from home and the handicap format leaves a great deal more scope for tactical thinking and especially cooperative riding. Today the last group off started more than a lap behind the first (which naturally included me), who rather unwisely tried to latch on. It could not, and did not, last. I was caught by the second group off (3rd cats?) but we stayed away from the later groups so I am hoping for another top 20 placing.
Posted by Martin Porter at 21:34 No comments:

My first appearance this year at the summer evening series at Hillingdon. The race was abandoned after 40 minutes as an ambulance was on the circuit dealing with a fallen rider. I hope she recovers soon. A stark reminder that Hillingdon can be a hazardous place. Crashes there are not uncommon, though abandoning the race is. Most of the best things in life involve some degree of risk. The advantage of a closed circuit is that it removes from the equation the motor vehicle, which is of course the source of almost all catastrophic injury to cyclists.
Posted by Martin Porter at 09:19 No comments:

Safety in Numbers for Cyclists

Gwyn Prosser MP has tabled an Early Day Motion (EDM 1431) drawing attention to the correlation between safety for cyclists and the number of cyclists on the roads. It follows the CTC's launch of a campaign for a target of doubling cycling use. So far 102 MPs have signed it. I have tried twice to get my MP, who mentions cycling on his cv, to join them but have just got his letter stating he does not generally sign EDMs. I note that he has signed 5 EDMs this session including one about a BBC magazine launch and, in an earlier session, one about flags flying above public buildings. Unlike some of our elected representatives, his ethics are flawless but I wish I could influence his priorities.
Posted by Martin Porter at 10:32 No comments: