The Freight Transport Association has issued a new guide called the FTA Cycling Code.  It is a useful idea to produce something like this to attempt to reduce the tragic and unnecessary loss of life and injury that occurs when lorries come into contact with bicycles.  The advice for cyclists is readily available elsewhere and the section is most useful for pointing out to lorry drivers that cyclists are advised that:

"Your road position should not be less than one metre from the kerb and should be further out if it is not safe for a vehicle to pass. If someone does pass you inconsiderately then you have more room to get out of harm’s way. Keeping away from the gutter will enable drivers to see you and also help you miss the drain covers and debris on the side of the road too"

My experience indicates that some of the advice to lorry drivers is badly needed.  I hate to quibble but I believe the following section should urge 1.5 metres:

"3 ‘Give a metre’ or hold back until there’s room
Many roads have too little space for cyclists and hgvs at the same time. If an hgv cannot give a cyclist at least a metre’s clearance then they should hold back. Drivers should bear in mind that cyclists are trained not to ride too close to the kerb. The Highway Code advises that you should give at least as much room as when overtaking a car."

Drivers reading this who do not have experience of cycling are likely to feel that a metre is fine and ignore the 'at least' bit.  My view, and it is one adopted in much of Europe, is that 1.5 metres is better practice and is definitely required if the lorry is overtaking the cyclist at speed.  Furthermore if a metre is just fine then that cyclist who is travelling 1 metre out from the kerb is 'an obstruction' and 'should keep in to let me pass' as has been yelled to me too often.

The reason for the title of this post is that the above picture is reproduced on the guide without any obvious indication of irony or that it is illustrating a problem.  Both the driver and the cyclist are ignoring the advice in this guide and the people who have selected the photograph do not appear to have noticed.  I am sometimes close to despair.

..and here is one that happened to me yesterday

Michael Stewart at Court yesterday.  Picture from Manchester Evening News
Michael Stewart was convicted and sentenced yesterday at Manchester Magistrates' Court of driving without due care and attention and for common assault.  He had pleaded guilty to both offences.  He was acquitted of the charge of dangerous driving.  After driving close to a cyclist, Neil Chatterjee, Stewart got out of his BMW car and grabbed Mr Chatterjee by the throat.  The Magistrate accepted as beyond reasonable doubt that Mr Chatterjee's account of the assault was correct and that Mr Stewart's (that he had only grabbed his clothing) was false.
Sentencing Stewart, the Court described the attack as reprehensible, serious and road rage.  The Manchester Evening News reports that Stewart was ordered to pay a £200 fine and £200 court costs. His licence was endorsed with five penalty points.  He was also given a six-week community order with a four-week evening curfew.
Stewart admitted the assault and there is no report of any previous convictions.   Accordingly had these events occurred in the Thames Valley Police area he would have been given a caution as a matter of course.  Fortunately the Manchester Police and CPS are made of sterner stuff and deserve full credit for bringing this before a Court.  Equally it is incredibly rare for a prosecution to arise from passing close to a cyclist without actually knocking him off.  Police forces everywhere will hopefully note this result.  The Manchester CPS were not afraid of erring on the side of the victim; the fact that Stewert was acquitted of dangerous driving does not mean that the decision to puruse the charge was incorrect.
Posted by Martin Porter at 13:47 5 comments: 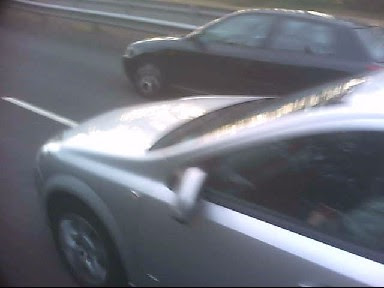 The driver of this silver car LC10PYB has a number of excuses for nearly killing me.  He responded to the policeman who wrote to him that I was presenting an unneccesary hazard by not using the shared use cycle path alongside this road.  He was affronted that my presence caused him to have to move further into the offside lane (did he??) than was usually required to pass a bicycle.  He was not apparently to blame at all, as I should not have been there.  He reinforced these points by asserting that his passenger agreed with him.  According to the policeman, who forwarded these comments to me, he is not alone amongst the drivers whose carelessness I have reported in expressing those sentiments.  This is a motorist's mindset that ought, as I have explained in earlier posts, to have been dispelled finally by the quashing of the conviction of Daniel Cadden﻿.
I have tried segregated cycling infrastructure.  I tried it again this week on my way back from a race at Hillingdon when I was willing to spin out at slow speed, but I just cannot see it as a sensible way of travelling a moderate to long distance in a reasonable time.
There is a shocking irony here; that motorists many of whom are highly antagonistic to any attempts to get them to slow down in built up areas or even in some cases hostile to attempts to enforce existing speed limits(and thereby unquestionably to save lives), consider it perfectly reasonable to expect cyclists to sacrifice speed and convenience just to get out of their way or (so some like the driver of LC10PYB imply) it is perfectly alright to endanger our lives by passing by at 50mph with a couple of feet to spare.
Posted by Martin Porter at 20:58 9 comments: 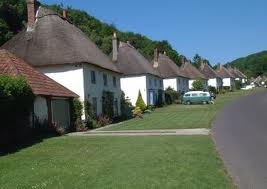 On the late May bank holiday weekend, Pendragon Sports organises a 3 day cyclosportive event running a loop out and back in different directions each day from Somerton.  As I blogged last year I am full of admiration for those who do three days.  I cheat and do only the second day which heads south to the Dorset coast and back.
There was a stiff north westerly wind which blew us down to the coast but then slowed progress on the return leg.  Following the start, a fairly large group formed and this started to split on the steady climb out of Sherborne.  I put in the effort to cross the opening gap and stick with the front group.  This was probably a mistake as I ended up putting far too much effort in too early.  I knew that the climb out of Cerne Abbas would be a point at which I could well get dropped so I passed straight through the first feed (which at 30 miles was too soon for my needs anyway) and tackled the hill at my own pace.  The group passed me as I neared the top.  I had thought I might hang on until the hill at the coast on the Lulworth army firing range but I actually got dropped a little earlier than that on the more modest climb out of West Lulworth.
After getting to the firing range on my own, I enjoyed taking the bigger hill with the views of tanks and their targets, Poole Harbour and finally open sea.  At the top I took a quick break and another rider caught up so we two-upped to the spectacular ruins of Corfe Castle.  Here we were caught by the next group who provided well needed shelter as we turned into the wind to head towards Wareham and the first feed where we stopped for 6 minutes enjoying sandwiches, pasties, pork pies and sweets (certainly the best food I have encountered on a cyclosportive).  This group was well organised doing one mile turns at the front in rotation.  We were now 66 miles in and as I led out of the feed I  indicated I would not be able to do a mile - so we settled on one minute turns, which worked well for the next 15 miles or so to Milton Abbas.
We took the long relentless drag from there up to Bulbarrow Hill at a sensible pace altogether though I was by now definitely flagging.  At around 90 miles there was another feed.  All bar me stopped, I wanted to press on gently.  This I did and when the group came by me I did not have the energy to latch on.  I spent the last 29 miles of this 119 mile ride on my own, towards the end the next group came by me but by this stage I could only watch them flash by and limp to the finish.
Two years ago, on this event, I got a Gold, last year a Silver and this year a Bronze.  These results mean little and do appear to be subject to significant vagaries and some subtle differences in route and less subtle differences in weather from year to year.
'Officially' the route was 117 miles and my time 6 hours 32 minutes
Stats from my Garmin were 119 miles in 6:24 with an average speed of 18.5 mph.  Apparently I hit 43 mph somewhere.
A great ride, I will certainly be back though I suspect I will be sticking to one day; the following morning a repeat challenge did not seem an appealing prospect and not only because of the rain.  Those that do the three days are hardy indeed.
Posted by Martin Porter at 22:26 No comments: