The evidence (taken from the reports of WalesOnline who have covered this story in detail)
At around 8pm Mr Wojcicki drove his 3 ton minibus into the rear of Owain James, who was on his bicycle, causing him fatal injuries.
The collision occurred on the west bound carriageway of the A472, a dual carriageway road subject to the national speed limit (70 mph for a light vehicle, 60 mph for a mini-bus), near Newbridge in South Wales.  So far as I can tell this is fairly representative of the location. 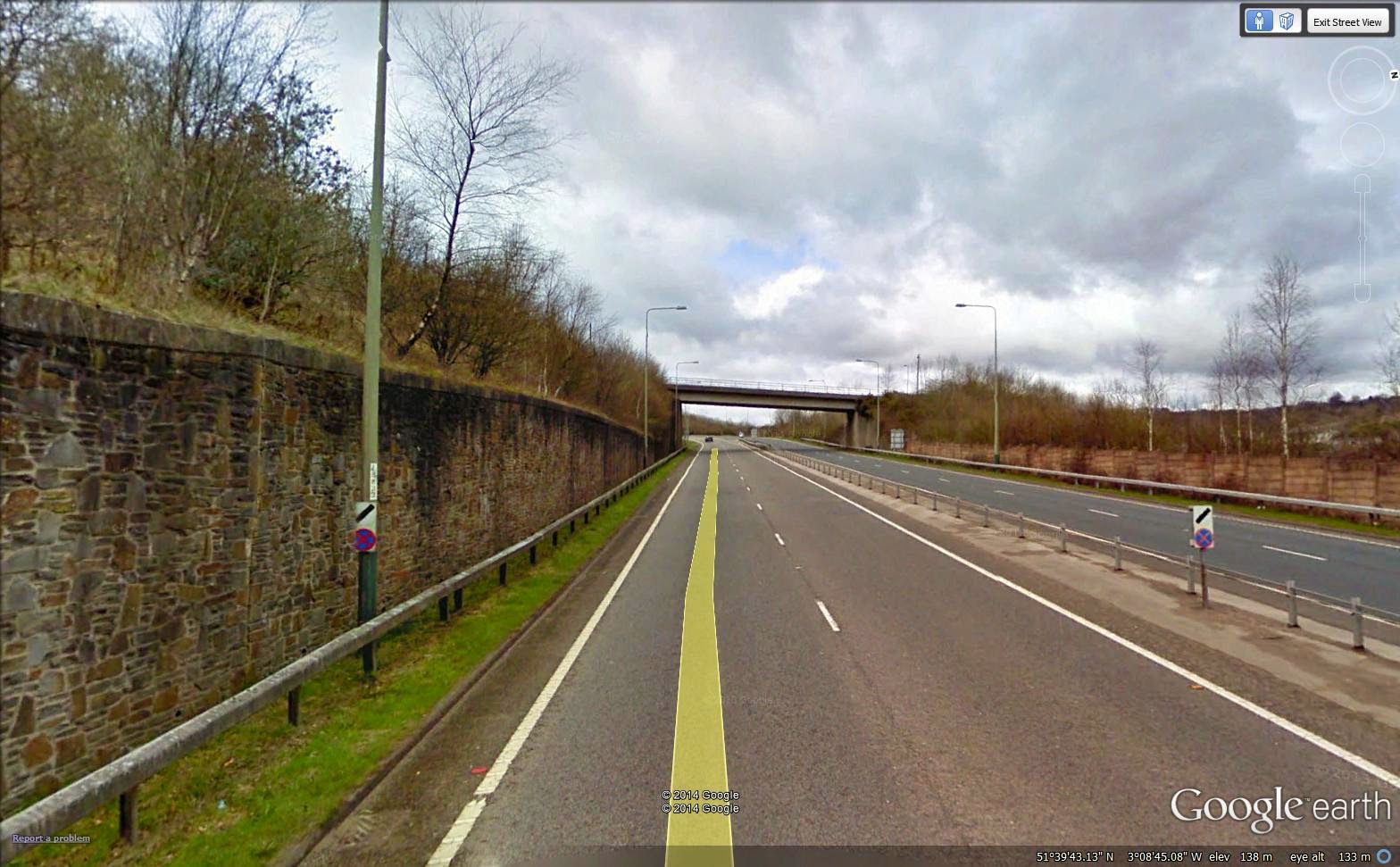 Google earth suggests that each lane is around 3.75 metres wide.  The width of Wojcicki’s Mercedes minibus is 2.25 metres wide.  That debris strewn strip by the grass looks to be about 1 metre wide.
The prosecution opened the case on the basis that Mr James was riding inside the white rumble strip.
One independent witness driving a Landrover in the same direction gave evidence that “The minibus did not alter its course at all and no brake lights came on.  The minibus ploughed into the cyclist”.  Another independent witness also travelling West said he saw a cyclist in the area between the grass verge and the rumble strip and thought the driver of the mini-bus “must have been distracted by something because the minibus was drifting from the lane to the rumble strip back and forth.”
Wojcicki did not stop his minibus for a distance of 125 metres.  When he did get out of his van he was seen taking photographs of Mr James with his ‘phone.  Whether because of this or (as one would like to think) they would have done it anyway the police examined Wojcicki’s ‘phone and found that a short while earlier he had taken photographs of a vintage car at a set of traffic lights.  The last traffic lights passed by Wojcicki were a couple of miles back on the opposite (North) side of Newbridge and I surmise it was here that the photographs were taken.
Wojcicki’s accounts following the collision were contradictory.  He told witnesses at the scene that he had not seen Mr James prior to the impact.  The following day interviewed by police he claimed that he saw Mr James from a distance of 20-30 metres away [My note: the forensic evidence if any has not been reported but lines of sight were obviously far better than that and no explanation appears to have been given as to why he saw him so late –at a closing speed of approximately 35 mph this would have given less than 2 seconds to react].  He claimed he had been happy with his driving and comfortable to stay in his lane where he was doing 55 mph.  He added “I did not cross the white line” [My note: I cannot tell if he means the rumble strip or the line dividing the westbound lanes – the evidence of the first independent witness that he did not alter course at all suggests perhaps he did not cross either but the second independent witness gave evidence of drifting to the rumble strip].  He then claimed that Mr James swerved into his path.
When giving evidence Wojcicki accepted that he had taken a photograph when stopped at traffic lights and maintained that he had seen Mr James on ‘the hard shoulder’ but ‘I could see no hazard and was happy to stay in my lane and overtake’.  He apparently mentioned that in Poland it is considered acceptable to overtake a cyclist with 1 metre’s clearance.  He accepted that he was constantly adjusting his position on the road because his van had a tendency to move to the right ‘but I did not get close to the white line’ [meaning I think the rumble strip].

The result
The charge was causing death by dangerous driving.  The prosecution case was that Wojcicki was looking at his recently taken photographs and therefore did not see Mr James and that explained why he did not avoid him and why it took so long for him to stop after the collision.  The jury convicted.  The Judge made clear when sentencing that he was sure the prosecution case was right.  On the evidence I have seen reported I might, as a juror, have felt unpersuaded to the criminal standard (beyond a reasonable doubt) that Wojcicki was looking at his photographs immediately before impact.  However I would have convicted nonetheless because, for whatever reason, he cannot have been paying attention to the road ahead if he did not see Mr James until he was 20 to 30 metres away and worse because of the appalling dangerous complacency that led him not to trouble to move out before passing a cyclist.  At the very best, and on Wojcicki’s own evidence this was a close pass gone tragically wrong.  I can think of sinister explanations other than looking at photographs to explain taking a while, before deciding to stop.
The positive things are that, unlike other recent cases there is no record of distraction over whether or not the cyclist had traversed the rumble strip or whether the cyclist should have been on that road at all.  The rumble strip is intended to mark the limit of the useable carriageway and anybody who is ‘comfortable’ passing a cyclist close to the rumble strip is driving dangerously (contrast R v Dove).  Equally Mr James had every right to cycle on that road (contrast the discussions about alternative routes in R v Petterson) and the concomitant right to expect other roadusers to exercise care when passing him.


Perhaps even more encouragingly there was no reported debate about high-vis or helmets.  Maybe this is because it was so obvious that a helmet would have made no difference and because the final defence decided upon was that he DID see him albeit very late rather than the more conventional ‘didn’t see’ Defence.

Wojcicki is now beginning a 5 year sentence of imprisonment.  Unusually in such cases, he has been disqualified for a long period, 10 years.  It would be good to think that the tide in these cases is turning.   CTC’s Road Justice campaign has been energetically targeting this area.  Likewise a valuable report last month from the Transport Select Committee highlighted the need to encourage motorists to share the roads responsibly with bicycles and calling for an amendment to the Highway Code which would emphasise the rights of cyclists to share the roads with drivers.  The mainstream body of people who cycle will I am sure, want to get behind that call.
I only hope that if this case gets before the Court of Appeal they back the Judge on the sentence and particularly on the 10 year driving ban; contrast these cases.

Postscript
I have followed this case with particular interest because the close pass (often from a white van on a dual carriageway) is for me the most terrifying aspect of my commute.  I have on occasions been literally inches from sharing the fate of Mr James.  I am sure it must put a lot of people off cycling altogether.  Whilst statistically most collisions happen at junctions, it is usually somewhat easier to guard against the idiocy of the road user failing to accord you your right of way than it is to deal with the peculiarly unnerving conduct of a vehicle that comes up fast and close from behind.  Always allow yourself plenty of room to your nearside to swerve into if you need it.

A further postscript
I did not mention above the controversy that arose between Judge and Defendant solicitor described here.  This was raised by the Judge only after the trial had concluded for the very sound and proper reason that it should not be permitted to prejudice the trial.  I do not think anybody doubts Alan Blacker's entitlement to represent clients in the Crown Court, presumably how he dresses is regulated by the Law Society.  Equally I would very much like to believe that the nationality of the Defendant had no bearing on the jury's decision.  A conviction in not wholly dissimilar circumstances was secured against Ms Katie Hart an English woman in the hands of an English jury.  What I suspect is more likely to have made a difference is that the involvement of a mobile telephone probably removed the ever present risk of under charging (with careless rather than dangerous driving).  For the reasons I have set out I consider that the charge and the verdict in this case were both plainly right and I trust that neither the nationality of the Defendant nor the identity of his lawyer made a scrap of difference.
Posted by Martin Porter at 13:41 16 comments: