Back in January I reported the driver of a yellow Suburu car, L464XDG, for careless driving and threats directed at me when I was cycling through Hounslow.  I now know the driver to have been one Levi Rayner.  He evaded interview by the police for a long while but when finally caught up with he admitted the threats and was duly cautioned.  He denied careless driving but last week when he got to court decided to plead guilty.  I have just learnt he was fined £37, with a victim surcharge of £15 and prosecution costs of £85 with 3 penalty points on his licence.
I throughout maintained that he had been using his vehicle deliberately to seek to intimidate me as his subsequent conduct confirms.  He thought I should be riding at the side of the road and felt justified in using his car to force me there.
I was not at Court - I was told he would be pleading not guilty - so am unable to comment upon the reasons why the sentence was just about as light as it could possibly be.

The Ups and Downs of yesterday

Mainly Ups, thankfully as with Bradley Wiggins and Chris Foome on 1st and 2nd spot on the podium in Paris and the yellow jersey leading out Mark Cavendish for the stage win, things could hardly get better for British Cycling.  Surely the best day for British Sport since (at least ) 1966 and the 3 greatest active British sportsmen.
The Down?  Well attitudes here to racing still need to adjust to reflect the fact that cycling is no longer a 'foreign' sport.  Attitudes need to change most dramatically within the police.  On the same day of Britain's greatest sporting success for over a generation, the Surrey Police were stopping a Surrey League Road Race as my fellow blogger Rob Sharland reports
Posted by Martin Porter at 09:41 3 comments:

I opted for Acte 2, the route from Pau to Bagneres de Luchon in the Pyrenees. 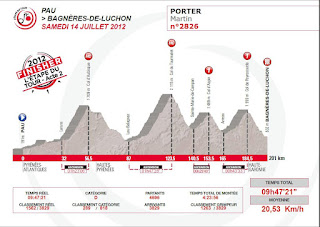 Four big climbs, the Aubisque, Tourmalet, Aspin and Peyresourde were involved.  4,696 riders started and 3,829 reached the finish line, so a much lower rate of attrition than Issoire to St Flour last year.  However, like last year, the weather left a little to be desired.  It was pleasant enough in Pau for the start but by the time I was half way up the Aubisque the persistent drizzle had started and every descent, save the lower part of the one into the finish, was done on wet roads in poor visibility.  I tend to descend in such conditions not that much faster than I ascend - a slight exaggeration but I pass people on the way up never on the way down -and my better 'classement grimpeur' compared to my 'classement reel' reflects this.
Happily I had done a ride in the foothills of the Pyrenees last Thursday when the sun shone brightly.

After bad experiences with tyre blowouts in the Spring I was apprehensive of mechanicals but my only problem was that a stone flung up from the road was the perfect size to lodge into my pedal in such a way as to jam it.  I had several people at the food stop at St Marie de Campan trying to force my foot off a jammed pedal, in a way that migiht have been comical had I not been so cold, wet and anxious to begin the next climb to restore my body temperature.  Thereafter I warmed and the rain relented and I probably had my best climb up the wonderful Peyresourde reversing the final part of the first etape I did, in baking heat, in 2007.

So I have now done six, 3 in the heat and 3 in the rain.  The difference this year is I did not really anticipate the conditions and did not dress appropriately.  I would have given the weight equivalent in gold for long fingered gloves (left in my hotel room in Pau) whilst I was coming down off the Tourmalet; a descent that I note from the on line resource Strava took me over 32 minutes compared to under 18 minutes taken by one Kenny Nijssen on the same morning.  Whether he slowed as I did for the mud strewn all the way across the road at La Mongie intrigues me.

Even if these things seem less than wholly pleasurable at the time, I am always glad after the even that I took part.  I reckon 289th in my age category is creditable enough along with being in the top third of climbers of any age.
Posted by Martin Porter at 12:22 9 comments:

I did my first cycle commute for ages earlier this week.  Miserable not so much because of the rain but because of this 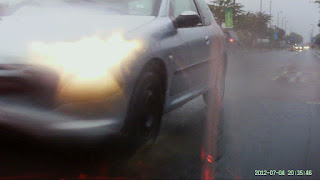 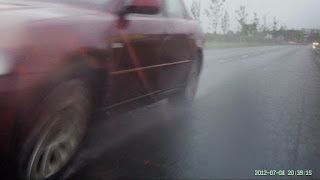 and many others like them
and the fact that nobody will do anything about it.

It was the duty turn of Imperial Racing at Dunsfold aerodrome last night for the Surrey League Masters Race.  With the Collins family there it was like a throw back (or forward) to the Winter Series.  The rain was coming down as we signed on but fortunately it all but stopped by start time leaving an overcast sky with a southerly wind.  It may have drizzled but once you get going you do not notice it   I had a good race (not in the result which was 16th out of 17 finishers) but I made it into the early break and 3 of us were away for well over a lap.  One strong rider Seamus Kelly of Kingston Wheelers, attacked and got away on the first time down the back straight.  A rider in BMC kit then jumped after him as we got to the bend and I just stuck to his wheel.  Once we were away from the bunch I recovered sufficiently that we could do a two-up to Seamus, but he was fast and not waiting for us so it took us a half lap to catch up.  We then did a 3 up effort for a further half lap but Seamus was doing most of the work and at the end of lap 2 just after I had done a token turn he powered away.  When I looked back and saw we were dropping the BMC man, who had towed me up, I felt it was only sensible to stick with him.  We had a go at a 2 up to catch Seamus for a second time but it didn't work.  The bunch reappeared (photo shows us just before the catch) but then eased when they got to us and just sat behind us.  Seamus built up a gap again and half a lap later the 2nd cats jumped off to join him and stayed convincingly ahead until the finish.
Nice to be involved in a little more of the action than usual and I am left wondering if I could have made more of it with better tactics.  Two age grouped races are run simultaneously at Dunsfold and so with both Seamus and Chris in the younger age group than me..if only.
Posted by Martin Porter at 14:34 1 comment: