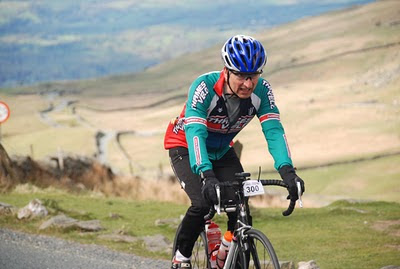 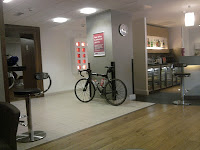 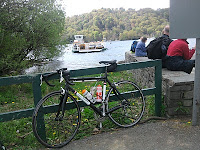 On the day (which despite the forecast was generally dry with only gentle wind) I opted for an 0800 start which was a bit later than the rest of the Thames Velo team who waved at me as I made my way over Hawkeshead Hill to the start in Coniston.  I actually got to the Kirkstone Inn faster than last year but things deteriorated rapidly from there.  My descent of Kirkstone was impeded by a car that had overtaken me at the top and gone down on his brakes and I was 10 minutes behind by the Buttermere feed stop.  I covered the ground to Whinlatter in a similar time but really lost time over the ups and downs to Coldfell.  Hardknott and Wrynose went better for me though, with no falling off and no need to put a foot down.  The unanticipated good weather meant there was mercifully little motor traffic on those narrow steep passes.  On the run in towards Coniston was the welcome sight of a Cumbria Police Officer supervising the stopping of traffic by marshals to allow us to make an uphill right turn without stopping - a sight that I fear would leave Thames Valley officers chewing on their truncheons in distress at the momentary inconvenience caused to real (ie motor) traffic.
I made it to the finish in just under 8 hours; a hugely disappointing 30 minutes longer than last year.  A celebratory pub meal followed; then it was up at the crack of dawn (literally) for me to ride round the lake to Windermere in the pouring rain to get the first train back to London and work.
Posted by Martin Porter at 19:07 2 comments: