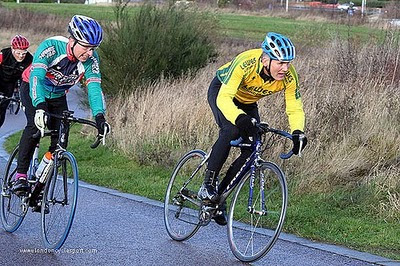 A tradition far more wholesome and less controversial than the Boxing Day Hunts is the Imperial Winter Series Boxing Day Races which I took part in for the first time today.  A stiff wind down the backstraight made any breakaways virtually impossible though some (including my teammate for over a lap) had a good go.  Seemed faster than recent weeks but that must have been an effect of the wind, as was the dropping of a fair few this week.  I was finding it difficult to keep tabs on what was going on, mistaking two dropped riders at one point for a break.  I was there for the sprint but barely and got obstructed by a slower rider taking a racing line through the S bends oblivious to anyone behind.  That's racing: you have to be both strong and in the right place.
Average speed 23.1
Posted by Martin Porter at 13:53 No comments:

Not quite so many on the start line this time around.  Perhaps the freezing temperature had something to do with that.  By the start time the worst of the ice had been chipped off the circuit or hidden under strategically placed cones.  After a lap or two the cold no longer mattered.  I felt good and at no time got trapped at the back, though the smaller field definitely helped there.  Unhappily there was a crash immediately ahead of me on the last lap coming out of the tight bend.  I had to stop for that but then restarted and about six of us passed the 3rd cats (who not only moved over but shouted encouragement) and sprinted for the line for who knows what lowly position (21st it turns out!)
Average speed 23.6mph.
Posted by Martin Porter at 18:36 No comments:

The Helmet Debate Drags On

The Transport Research Laboratory has this week published a further paper on the effectiveness of cycle helmets.  A long report that concludes that
"Cycle helmets would be expected to be effective in a range of accident conditions particularly the most common accidents that do not involve a collision with another vehicle, often simply falls or tumbles over the handlebars and also when the mechanism of injury involves another vehicle glancing the cyclist or tipping them over causing their head to strike the ground."
It would, I suppose, be genuinely astonishing if it were found that helmets were of no use in protecting the head in any circumstance.  I have a clubmate who found his particularly helpful when caught unawares by a descending carpark barrier.  I sometimes have wished I was wearing mine in the kitchen when my head has contacted an open cupboard door.
The TRL report expressly says it does not deal with the vexed question of risk compensation, whereby people's behaviour changes as a consequence of seeing themselves or others as less vulnerable.  Nor does it deal with the questions whether the wearing of helmets should be encouraged or mandated, but its conclusions probably mean that we should not be expecting any change in the Highway Code's advice to cyclists to wear a helmet (accompanied by a vulnerable looking cyclist cowering in the gutter).
Whether this report will provide further impetus to motor insurers to blame cyclists for head injuries because they have not worn a helmet remains to be seen.  What I will say is that in no case yet has a Court determined that a cyclist both ought to have been wearing a helmet and that it would have made any difference.  No deduction for contributory negligence has therefore been made by a Court to date.  Cyclists and their lawyers should bear that in mind when a reduction is suggested.
I have already expressed my views on contributory negligence here.  Nothing in the latest paper changes my view.  It is so much more important that people cycle than that they cycle with helmets and the Australian experience demonstrates that you cannot encourage both.  It is so much more important that accidents are prevented than that we are forced to look to personal protection to hope to minimise their effect.
So when we see a famous footballer taking his children out for a bicycle ride let us applaud him for getting on a bike and not attack him because he has chosen not to wear a helmet.
Posted by Martin Porter at 20:09 No comments:

The trouble with cycle lanes

I am not a fan.  On my commute in this morning I was using a cycle lane to filter on the nearside past stationary traffic in Isleworth when a right turning car took me out.  I landed rather ungracefully on his bonnet.  Fortunately neither of us was going very fast (15mph my Garmin says) and I am essentially unhurt.  Looking at Google Maps (me left to right in that very narrow cycle lane) I see that the lane markings have changed since the satellite photograph as the cycle lane now extends past the driveway to the bus stop.   I would normally overtake on the offside but the cycle lane meant the stationary traffic was further out so, with a central traffic island, there was no room.  When passing a side road I am always in the primary position or to the offside of stationary traffic but I had not noticed this driveway nor had I seen the gap in traffic that enabled the oncoming car to turn right into my path.
I can now confirm that not all accidents are reported to the police.  I shall not bother [edit: actually I shall; I will try to report by email and see if the Metropolitan Police now make reporting easy]- the last time I was taken out on a roundabout and ended up in hospital the police agreed not to prosecute the motorist if she went on a course.  I will report it to CTC's SMIDSY campaign instead.
Posted by Martin Porter at 21:07 2 comments: 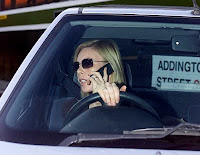 Ms Harvey seems to me to be a bit like the sherriff in the lawless frontier town who does not dare to tackle the bandits with the shotguns, but instead urges her deputies to deal with the kids with the pea-shooters.  Let's exaggerate the harm done by the pea-shooters and turn a blind eye to the death and destruction threatened by the untouchables.
Posted by Martin Porter at 15:23 3 comments:

A fine day but with a stiff northerly wind for the second race of the Winter Series.  3 Thames Velo riders in the 4th cat event and 2 in the 3rds today - a record at least in recent years.  We were given advice on the start line as to how to avoid last week's difficulties with the coming together of the two races but in fact the problem solved itself this week.  Perhaps we 4th cats were marginally faster, or the 3rd cats marginally slower or both, but we were blissfully undisturbed by each other.  The field was not quite as crowded as last week's 70 riders but was still fairly full.  I aimed to keep near the front for at least the first 30 minutes.  For a short moment I thought I might have made it into a break of 5 but the pack has a capacity to put on an impressive burst of speed both to reel in any breaks and to leave me for standing in the final lap.  My teammate Andy fared better, in only his second race, he got towards the front and stayed there until the final sprint.
Average speed 24mph
Posted by Martin Porter at 16:15 No comments:

At last - racing again in the Imperial Winter series run by the terrific Doug and Lucy Collins.  Met up with my teammates Andy and Paul, the former a first time 4th cat and the latter a seasoned 3rd.  I got a puncture warming up which I noticed at the start line at 1pm (the start time).  I asked Doug for a spare wheel but he told me I had time to change my tube.  Well obviously he doesn't know just how slow I am.  By the time I got back to the car, fixed the punture and returned to the circuit they had all started.  The Commissaire kindly let me join a lap late; well that is one way of getting to the front early on.  As my club coach noted I can stay near the front for the first half of the race but seem to lose this ability later on.  For me it all fell apart a bit as the 3rd cats went by as it took for ever and for that period it was impossible to pull out and move back towards the front.  I came in at the back of the bunch as did Andy (brilliant, for my first few races I was lapped).  We hung around long enough to see Paul come in in the rear portion of his bunch.
For a full account of this (and many other) races see Lance Woodman's blog.
Average Speed 24 mph.
Posted by Martin Porter at 21:04 1 comment: