To let you all know my twitter account has been suspended at the request of @dragonducatis.
I have asked twitter to reinstate it.
Posted by Martin Porter at 10:55 5 comments:

When is a law not a law? When no-one troubles to bring it into force.

Note: I am happy to report that the Coalition Government finally listened to concerns expressed by me and many others over this and section 137 came into force in March 2015 as one of that Government's final actions.
http://www.legislation.gov.uk/uksi/2015/819/pdfs/uksi_20150819_en.pdf


In July 2006, Kelly Woodward, died when the car in which she was travelling as a rear seat passenger was driven into a tree.  The driver, Andrew Burrell, was convicted of causing her death by dangerous driving and of driving over the alcohol limit.  He was sentenced so leniently that the Court of Appeal intervened imposing a 4 1/2 year prison sentence and a 5 year driving ban.
Kelly's family were nonetheless dismayed to discover that much of the ban would pass whilst Burrell was behind bars and they campaigned tirelessly for a change in the law so that a driving ban would start when an offender was released from any prison sentence imposed in respect of the same offence.  She handed in a petition to Downing Street (then occupied by Tony Blair) and enlisted the support of Jack Straw (then Lord Chancellor/Justice Secretary).
I understand that Kelly's family were invited to the House of Commons Gallery to watch the passage through Parliament of the Coroners and Justice Act 2009 which received royal assent on 12th November 2009.
Section 137 of that Act provides that Schedule 16 makes provision about the extension of disqualification from driving in certain circumstances.  Schedule 16 in turn amends The Road Traffic Offenders Act 1988 by introducing a new "s35A Extension of disqualification where custodial sentence also imposed" which in rather convoluted language provides for the period of disqualification to be increased by (broadly) half the prison term which I take to be the period of imprisonment that the offender could be anticipated to actually serve in prison.  (Quite why it does not provide more simply for the period of disqualification to commence on the day of release I do not know but I am not a parliamentary draughtsman, nor even a criminal lawyer).
HOWEVER section 182 of the same Act provides that certain sections come into force when the Act is passed; that certain other provisions come into force 2 months after the passing of the Act; that more other provisions come into force on 1st January 2010; that yet further provisions come into force on such day that the Lord Chancellor may by order appoint and the remaining provisions (including section 137 as it has not been specified elsewhere) come into force on such day as the Secretary of State may by order appoint.
A general election intervened in May 2010 when the Secretary of State had still not appointed a date bringing section 137 into force.
Incidentally the term 'the Secretary of State' under the Interpretation Act 1978 means any one of 'Her Majesty's Principal Secretaries of State' so in practical terms means the Government.
Now five years on, it seems fairly clear that the Government is not going to appoint a date for the coming into force of section 137.  This is not self-evidently a party political matter.  More likely it is simply a personality matter.  Jack Straw backed this law but his influence with government ended in May 2010 and he perhaps had other things on his mind in the dying weeks of the Brown administration.
It does though appear at best unfortunate that a change in the law, hard fought for by Kelly's family, has come to nothing for the want of a Secretary of State's signature on a commencement order.
Posted by Martin Porter at 10:47 3 comments:

Yesterday, just days after the Wojcicki case, came the sentencing of Robert Palmer, a lorry driver who had earlier pleaded guilty to causing the deaths by dangerous driving of Andrew McMenigall and Toby Wallace, cyclists who were just 40 miles into their Lands End to John O'Groats ride in support of charity.  Palmer ran into them on the A30 near Newquay in Cornwall on 2nd July 2013.  Palmer was also sentenced for dangerous driving on a separate occasion when he was on bail for the fatal offences and drove into the back of another HGV.

There are similarities and differences with the Wojcicki case (which formed the subject of my last blog post).

Palmer had the advantage of representation from a barrister of some 40 years experience.  He (Palmer) realistically appreciated he had no Defence and pleaded Guilty to all 3 charges.  He did not seek to blame Mr McMenigall or Mr Wallace who were (like Owain James) completely blameless.  Palmer expressed, through his barrister, remorse at what he had done.

However the mitigation essentially ended there.  Palmer had a cynical disregard of road traffic law.  He was driving an HGV without the required rest periods and had only had 3 hours rest the previous night.  Furthermore he was such a prolific texter at the wheel that “The prosecution observes simply the absence of the phone activity in the period immediately up to the collision as an indication of his fatigue because prior to this collision his phone activity was very persistent.”  It is likely he fell asleep at the wheel.

The scene is similar.  This picture from Google earth appears to be fairly representative of the A30 road at the scene of the impact: 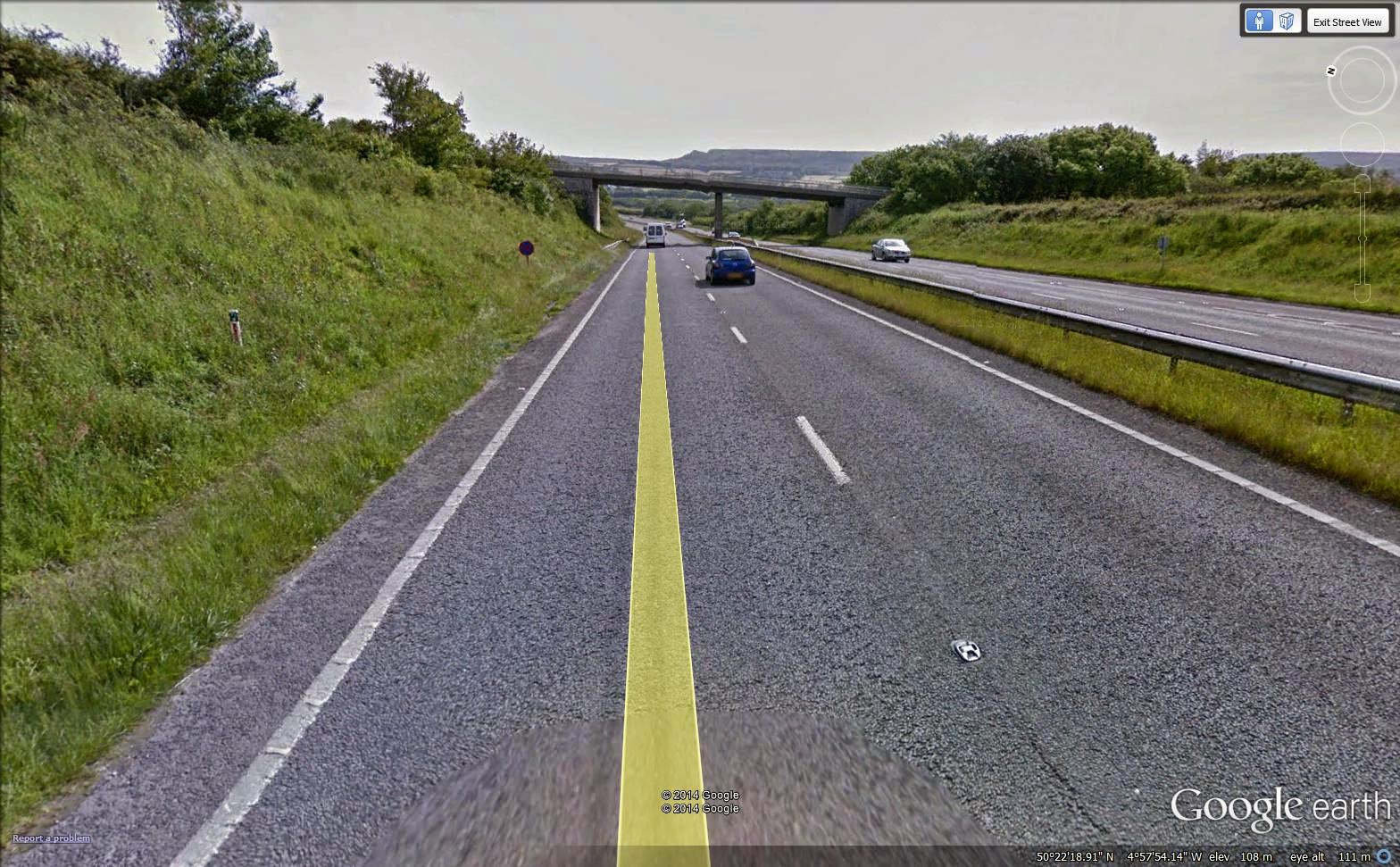 There is a rumble strip set around a metre or so from the grass on the nearside and an eye witness indicated that “the lorry had not moved out of the inside lane at all and stuck very close to the rumble strips."

Once again the sentence is significantly greater, particularly the driving ban, than sentences we have seen in the past and once again the prosecution were not deflected from bringing the correct (dangerous driving) charge.

It occurred to me as I typed this that I am yet again describing a scene where impact occurred in the vicinity of a rumble strip.  I do wonder at the thought process that goes through a Highway designer's mind to the effect that inattentive dozy drivers require assistance to remain on the road and that a rumble strip is sufficient to deal with that hazard.  Plainly it is not if a cyclist is present.

With such a spectacular disdain for the law it seems a very great tragedy that Palmer's repeated offending was not caught and dealt with before he ended the lives of two good and blameless people.

Prompted by a tweet, I have discovered to my surprise that the provision in the Coroners and Justice Act 2009 providing that a driving ban starts to take effect on release from any prison sentence (rather than on the day of sentence) has still not been brought into force.  I will look further into that when I return from holiday and draw it to the attention to the All Party Parliamentary Group on Road Justice.  That provision would and should have applied to both Wojcicki and Palmer.

Finally I think the dignified statement of both families issued yesterday merits repetition and dissemination:


“There are no words to describe the devastation and loss that we, and both families, feel following the deaths of our husbands. They were exceptional and giant men in every sense of the word,” they said.

“It is a tragedy that so many other families are also mourning loved ones who have been killed on Britain’s roads, particularly when many of these deaths were completely avoidable.

“So many of these families do not ever see a sentence brought against the person who has killed their husband, their child, their brother, their father.

“UK transport laws are lenient, charges are difficult and onerous to attain, and less and less resource is being dedicated to road traffic collisions.

“Toby and Andrew loved cycling. We believe that the rise in the popularity of the sport must be met by those with the responsibility to improve our transport infrastructure and improve education for drivers.

“We would like to thank everyone who has supported us and been involved in getting us this far.”