My Season Ends with a Bang

Regular readers will know I have a great enthusiasm for road racing.  Certainly my enthusiasm exceeds my aptitude.  There is an element of risk of course.  However in 5 years I have never before crashed or, perhaps more importantly, caused a crash in a race.  The racing provides an impetus for the dogged miles I put in commuting which, given the hostile environment of the roads particularly in and around Hounslow, I am hard pushed to portray as an unallured pleasure.

Lat Sunday Willesden CC put on a road race on the Great Milton Circuit in Oxfordshire.  It is a course I know very well and I earmarked it some months ago as a race I could finish.  Sadly I didn't.

I cannot tell you much about the race.  I have only small 'islands' of memory from around 0945 to around 1600 last Sunday.  Reference to my Garmin tells me I crashed at 1030 on a long wide stretch of road in Chalgrove.  I have a few short snapshots of the race, one short snapshot in an ambulance, another in the ICU at John Radcliffe, Oxford, one in an MRI scanner, one in Major Injuries and finally in Minor Injuries where uninterrupted continuous memory finally returned and I waited the rest of the day to get my wounds stitched up.

The distribution of damage to my body and clothing (and the very limited damage to the bike) suggests I went down onto my head and the back of my hands (possibly still gripping the drops) then flipped onto my left shoulder and side.  Eye witness accounts inform me that for no very obvious reason, a rider fell sideways into the road in front of me.  I imagine my front wheel stopped more or less instantaneously on hitting him flipping me and the bike over.

I have considerable litigation experience of head injury cases so I know this was, thankfully, a minor traumatic brain injury.  I can only have been unconscious for moments after the impact because I am told I started making an awful fuss, though my notes suggest I did follow this up with a 7 minute period of unconsciousness in the ambulance.  The prognosis for full recovery from a minor head injury is excellent (I have a personal conviction that long term consequences from a minor head injury, as often alleged in a Court, are more likely to be psychogenic than organic, though not all neurologists would agree).  It will though take a few days, as with my other injuries, to quite get back to normal.  Unfortunately I have had to work over the last 3 days (though thankfully from home) but I will now be taking time off to accelerate the recovery process.

In the meantime I am stuck with low mood (why me??), anger, queasiness and irritability.  The best cure for a depressed mood is getting out on my bike but that is an option that realistically is not open to me for a few days yet.  I have a few months to contemplate whether I will race again.  In the past when I had thought of the crash which would inevitably come some time, I had thought of roadrash, possibly a broken collar bone, not of landing forcefully onto my head with the awful risk of serious brain or spinal damage which that entails.  I feel I was unlucky to the point when I was flying through the air but then I was lucky that it was not a lot worse.

Roadracing does involve a huge degree of trust in your fellow competitors.  I trust all the people that I have got to know racing to handle themselves and their bikes well in a bunch.  Before I started racing I spent a summer going to training sessions run weekly by Prime Coaching at Hillingdon.  I highly recommend such preparation to any one who is considering taking up racing for the first time.

I suppose I have got to mention my helmet.  It is mangled.  Did it save my life as the nurse in the minor injuries unit confidently asserted to me?  I am sceptical.  My brain injury was caused by the sudden deceleration of my head which I doubt the helmet did much to ameliorate.  Certainly it saved me lacerations and roadrash to the scalp.  As always it is wiser to seek to avoid the impact rather than to put one's faith in protective gear.

Apologies to those who you who have found normal service to my blog interrupted.   Finally thanks to the road race organisers, first aiders, marshals, passers-by, fellow racers (especially the few who stepped forward with accounts of what happened) and wife who picked up the pieces. 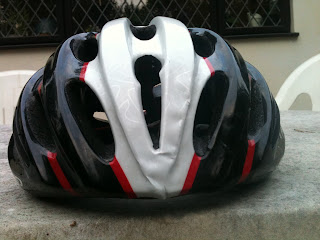 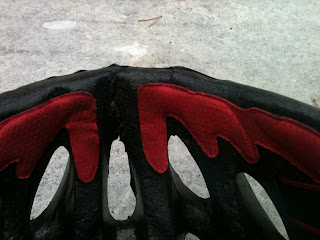 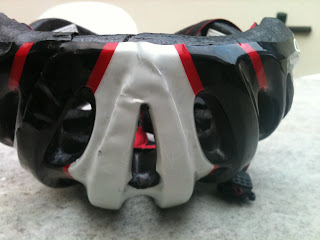 Postscript: the rider who fell in front of me was permitted to leave the scene and was not identified in any subsequent incident report.  Accordingly neither I, nor British Cycling officials, will ever know what caused him to fall, save that it was getting wet and his rear wheel was seen to slip outward.  I feel it is a pity that he was not asked for an explanation and, if appropriate, given advice.  All of us involved in the great sport of racing should be striving to reduce the risk of this kind of incident to the lowest level we possibly can.