More thoughts from a snowbound cyclist

Time for a new camera?

I have collected no useful footage from my helmet camera in the last few weeks because the battery life has deteriorated to just 17 minutes.  I need to decide whether to get a replacement.  There are arguments either way:
Against:
1.  Some of the publicity I am getting is not great.  My clerk has kindly been keeping an eye on it for me.  The other day he announced looking up from his screen, "It says here you are a brilliant barrister....it also says down here you are a total prat".  I already have a thick skin and have learnt the hard way not to seek to defend myself on these open fora; it is never constructive.
2   Perhaps I have done my bit, made a point and can now revert to just shrugging off bad driving in the way I used to in the past.
3.  I may be adding to the perception that cycling is dangerous.  This is the one that concerns me the most.  It is perhaps worth pointing out that I cycle a lot of miles.  Judging by DoT statistics I ride 200 times further than the average male cyclist!  The statistic must include a lot of very low mileage cyclists (or even everybody who owns a bicycle), but it is reasonable to suppose that what I encounter occasionally may be encountered by a moderate level cyclist only once or twice in a riding lifetime.  [Afternote:  I ride about 1,000 miles a month and the 'average' male cyclist apparently only does 200km a year.]
For:
1.  Some of the publicity is, I hope of assistance to cyclists generally.  Nothing I have done before has got me into such a range of newspapers, radio chat shows and even a local television news programme where the message is, I hope, getting across that there is some unacceptable driving out there which needs to be tackled more effectively than is the case at present.  On balance the postive feedback outweighs the negative stuff.
2.   After BBC London Radio had done with me, they interviewed DCI Nick Chalmers of the Met's Roadsafe.  I was impressed by him and, after a sceptical start reflecting some misunderstandings, I am now persuaded that it is well worth reporting bad driving using this online resource.  Mr Chalmers has made it very clear that the police find video footage very helpful.  A report to Roadsafe will not result in prosecution but will, where justified, lead to a warning letter which is a good deal better than nothing.  I accept that there cannot possibly be a prosecution for all the inadvertant bad driving that is out there.  Surrey Police have a very similar online reporting site.  So there is something constructive to do with the video footage other than just post it on youtube.
3.    A very major factor that explains the persitently low modal share of cycling as a means of transport is the fear of traffic.  This fear often overestimates the risk of cycling compared to other activities.  However it could never be described as irrational while poor (and even aggressive) driving around cyclists persists.  A new cyclist  could very readily be put off by such driving and revert to their own car.  I think on balance it is better to do what I can to address the bad driving at source rather than leave it to shock and surprise the new cyclist who takes to the streets.  I know of, and respect, the alternative school of thought which is to let motorists get on with their own thing and seek segregated infrastructure for cyclists.  However I jealously guard my right to use the roads (save motorways) which are ideally suited to fast efficient cycling, if only all motorists were willing to share.
4.    When something does get onto my film, I have sufficient legal knowlege, persistence and stubborness to push it further than others may.  If I can make a contribution to road safety above and beyond driving/cycling carefully myself, then I am very happy to devote time to doing so.  It is in my view a good cause.
5.    The cost of a replacement camera is such that I save it in just two days by taking the bike instead of the train to work.
Conclusion:  I have clicked the button ordering my new camera.  For those who have asked it is a veho muvi camera ordered on the web (many outlets) for about £45.  You will need a better SD card and mounts as well but I already have those from the old camera. 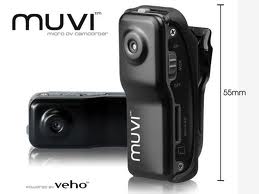 Where is all your footage of bad cycling?

One thing that is totally predictable where there is any discussion (particularly online) of what I have filmed, is that somebody will come on and complain about standards of cycling.  It is a reaction as reliable as any reflex; that cyclists have a total disregard for the law, ought to be taxed, insured, helmeted, day-glowed and so on.  Even DCI Chalmers, whom I have praised above, took time to encourage cyclists to broadcast video footage of poor cycling.
From a law enforcement perspective I can sympathise with this.  A policeman's obligation is to enforce the law, all laws.  That though is not my role; I am not an unpaid law enforcement officer and I can take the luxury of pursuing single-mindedly my interest in safety.  Were I to film a cyclist endangering anybody other than himself then I will post it, but I seldom witness and have never yet got film footage of this happening.
Cyclists break the law, of course they do - just as every other class of roaduser does, I see it every day and I do not condone it.  Nonetheless I am no more inclined to post up every occasion that a cyclist contravenes a red light than I am everytime a motorist contravenes a red light by passing an advance stop line.  Worse in my view is a cyclist in black unlit at night but that really doesn't film well.
I do not even bother with my pet irritation which is the cyclist who undertakes me when I am moving, typically when I am slowing for a red light.  Clearly not all cyclists are angels, I confronted one in Central London recently who had travelled for miles, undertaking me and then going through a red light and after I had overtaken him repeating the whole process again and again.  I eventually advised him for his own sake not to undertake moving vehicles (including me) and was rewarded with a string of obscenities.  But, and this finally is the point, however irritating this was, I knew he was there, could avoid him and he was not a danger to me or to anybody else save possibly himself.  This is a function of his weight, his speed and his size.  Besides it was a cold day and I was wearing a woolly hat with no camera mount.
I firmly believe that to get sidetracked from dealing with the faults of motorists by an idea that it is equally important or 'even-handed' to tackle the faults of cyclists is to severely trivialise the evils associated with poor motoring.  I find the relentless pursuit of the likes of David Cameron, Boris Johnson and Jon Snow by tabloid reporters anxious to photograph the slightest appearance of a breach of the law deeply unappetising and I do not think I will be contributing to it.
Those most offended, or at least those with most reason to be offended, by law breaking cyclists are the many law abiding cyclists who feel they are being given a bad name.  I understand that too but, as I say, I am free to focus my efforts where I wish and I choose road safety.
Posted by Martin Porter at 17:15