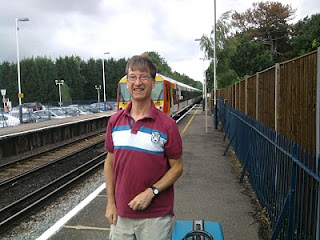 A morning spent swapping in larger sprockets and packing the bike box, then the train to St Pancras. I still miss the demise of the International Terminal at Waterloo as it takes an extra hour to get across London via Richmond and Hammersmith so as to avoid stairs to St Pancras. However the compensation came in the form of the restaurant at St Pancras where I met a work colleague for a late lunch to discuss, amongst other things, how to take forward our sports law expertise within 2 Temple Gardens. My contribution is some knowledge of cycling! 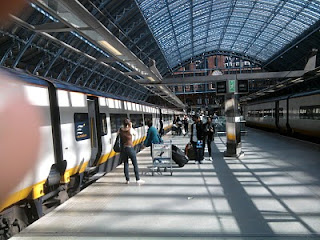 That discussed, I moved through security, my bag was comprehensively swabbed for explosives and I set off on the fast journey to Paris. Not much more than 10 minutes to get to the M25 which is impressive but almost all in tunnels. I celebrated being underneath the Channel with an expresso in the buffet. In France my Garmin GPS recorded 190 mph.
Once in Paris, the presence of bikebags gave etappers away. Angus and I struggled together jointly by hot metro to Austerlitz. There was time for a beer and a snack before we were joined by Alex, who I know from 4th cat races at Hillingdon. At around 11pm we boarded the sleeper, where I was berthed with another English etapper, Paul – like Lance Armstrong he has come over to cycling from being a triathelete. There was an area for bikes which we were able to make use of once a pilgrim to Lourdes, who appeared to be intent on spending the night curled up in the luggage area, had been persuaded back to a seat. My bed was comfortable but we seemed to be making haste through the countryside in wheel shaking jerks which I did not find conducive to a good night’s sleep. In the middle of the night peace descended as we stopped up somewhere for a long time, presumably while the train to Biarritz was being detached.

There is no doubt that the French do trains better then we manage.
Posted by Martin Porter at 08:55