The Mayor of London's Cycling Vision

Lat week's publication of the Mayor of London's new Vision for Cycling in London has got to be welcome.  The foreward (which has all the hallmarks of Johnson's writing) in particular expresses very welcome sentiments.  I highlight a few:

- "Cycling will be treated not as niche, marginal, or an afterthought, but as what it is: an integral part of the transport network, with the capital spending, road space and traffic planners’ attention befitting that role.
- "The Westway, the ultimate symbol of how the urban motorway tore up our cities, will become the ultimate symbol of how we are claiming central London for the bike.
- "I want cycling to be normal, a part of everyday life. I want it to be something you feel comfortable doing in your ordinary clothes, something you hardly think about.
- "There will be greatly-improved fast routes on busy roads for cyclists in a hurry. And there will be direct, continuous, quieter routes on side streets for new cyclists, cautious cyclists and all sorts of other people who would rather take it more slowly. But nothing I do will affect cyclists’ freedom to use any road they choose." 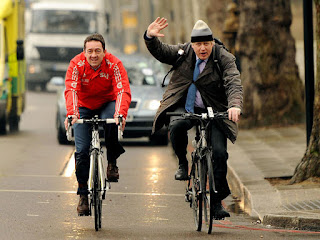 The Mayor and Chris Boardman on the embankment arriving for last week's press launch of his Vision.  Note 'normal' clothing,  Chris suitably distanced from the kerb, presence of HGVs and is that a car behind in the cycle lane? (not I trust a Mayoral following car). 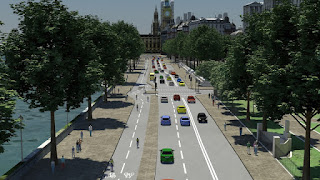 Contrast this impression of what the Embankment might look like.  Free flowing cycles and cars in their separated facilities with no HGV in sight.
I ride up and down the Embankment on my commute to/from work and know it well.  A very major advantage of the depicted segregated cycle track is that it would take away the need to wait at numerous traffic lights.  A lot of cyclists of varying speeds already use the Embankment so I am hoping these lanes are going to be suitably wide.  I would hope 2.5metres in each direction (5 metres) in total.  This depiction does show the low hanging fruit in the sense that alongside the river it is easy to avoid junctions save at bridges (where there is no artist's depiction) .  Further, I may be surprising motorists by being on the road rather than cycleway for at least part of the Embankment in order to make my turn into and out of The Temple.
The most remarkable part of this Vision is the preparedness both on the Embankment and the Westway for an elected politician to take space from motorists.  Even the very sensible pro-cycling President of the AA, Edmund King, has questioned the use of the Westway reasoning that street level cycle provision is to be preferred.  However both speed and safety are improved for cyclists if junctions are minimised.  Motorists have long had the benefits of limited access roads whilst cyclists have had to negotiate frequent junctions.  If I were mad enough to drive to work I would get all the way from Egham to West Kensington encountering one traffic light.  Extending this in a small way to bicycles is an excellent idea.  Of course there must be alternative provision for more local traffic, just as there is for motorists.  The Mayor is to be commended for a Vision that would make cycling more attractive for the fast and the less fast.  That and his specific assurance that nothing he does will remove the freedom of the cyclist to use any road she chooses confirms he sees no need to 'tame' the cyclist.
Hooray for Boris, now I wait with expectant interest to see what gets constructed and when.