The Criminal Justice System - Only as Strong as its Weakest Link 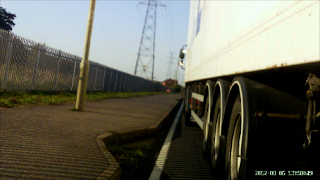 The driver's first misfortune is that he chose to try this incredibly dangerous overtake just on the Surrey side of the Surrey/London border (the Metropolitan Police have a very strange but strong disinclination to prosecute based on video evidence as confirmed in their evidence to the APPCG last month).  His second misfortune was that I had my camera attached to my handlebars.  I reported promptly to Surrey Police.  They investigated carefully and decided it was appropriate to charge the driver with dangerous driving.  I was told they anticipated a guilty plea.
However after the Court case was over, I was informed the driver had attended a preliminary hearing and that his plea of guilty to driving without due care was accepted and the dangerous driving charge dropped.  He was fined £265 with 4 penalty points.
I do not think it good enough that in those incredibly rare cases where the police choose to prosecute, the CPS respond by reducing the charge without even a reference back to the police or complainant.  I also think the CPS were just plainly and obviously wrong in deciding that this was not dangerous driving.
So I complained.  I just got back a letter (here and here) rejecting my complaint, to which I have just responded here.
Unless and until the CPS take this kind of offence much more seriously than they do then the broad masses of potential cyclists are going to remain terrified to use the road.  It terrified me and I am fairly hardened.  My full description of the incident is set out in the statement I made for the police here.
I intend to pursue this further.
Posted by Martin Porter at 15:21