A Metropolitan Police Roadsafe officer has written to me and, presumably, others with 'Advice to Cyclists' which relates to Advanced Stop Lines.  I have been asked to share it on my 'forum' and that I now do though I must confess after some hesitation.
The letter makes a point that filming a motor vehicle in an advanced stop box with the light red is not the same as filming it being driven past the first stop line at red.  It is theoretically possible, though I have to say in my many miles of commuting experience it does not happen, that a motor vehicle passes the first line at green, or at yellow when it is not safe to stop, but they do manage to stop before the second line.
A reminder of the Highway Code:


You MUST stop behind the white ‘Stop’ line across your side of the road unless the light is green. If the amber light appears you may go on only if you have already crossed the stop line or are so close to it that to stop might cause a collision.
Laws RTA 1988 sect 36 & TSRGD regs 10 & 36
Or, conceivably you were in a queue of traffic waiting to turn right and chose not to keep the cycle box clear.
Highway Code:

You MUST NOT move forward over the white line when the red light is showing. Only go forward when the traffic lights are green if there is room for you to clear the junction safely or you are taking up a position to turn right.
Laws RTA 1988 sect 36 & TSRGD regs 10 & 36

Advanced stop lines. Some signal-controlled junctions have advanced stop lines to allow cycles to be positioned ahead of other traffic. Motorists, including motorcyclists,MUST stop at the first white line reached if the lights are amber or red and should avoid blocking the way or encroaching on the marked area at other times, e.g. if the junction ahead is blocked. If your vehicle has proceeded over the first white line at the time that the signal goes red, you MUST stop at the second white line, even if your vehicle is in the marked area. Allow cyclists time and space to move off when the green signal shows.
Laws RTA 1988 sect 36 & TSRGD regs 10, 36(1) & 43(2)
In fairness, in the absence of yellow cross hatchings, the instruction only to go forward on green if there is room to clear the junction safely is advice rather than mandatory so a further get out for the motorist is that he was in congested traffic and, contrary to the Highway Code but not to the criminal law, got over the first line on green but could not make it over the second due to congestion.  This will hardly wash if the traffic is light.
The vast overwhelming majority of motor vehicles waiting in cycle boxes have got there in contravention of a traffic light but I would not quibble with a police decision not to issue a ticket to such motorists because of the possibility that they might challenge the ticket and a Court is then persuaded that there is reasonable doubt whether they have broken the law.  However a letter of advice if, as I believe, that is the most draconian step that the police would consider anyway would be justified in those circumstances where there is a reasonable suspicion of a breach of the law.
So what the police want, I suppose, is something like this, filmed last night but there are plenty of examples on every one of my commutes:


So the car on the left has clearly committed an offence and the one on the right even more clearly.  I cut the film where I did so that you can speculate on whether I stopped at the first line.  The police have taken the trouble to remind me that I would be committing an offence if I cross the first line at red other than through a lead in cycle lane (or 'cycle entry').  If there is such a lead in lane (or entry) at all it is in the gutter a quite hopeless approach to the Hammersmith gyratory if, like me, you are going all the way around to continue west on King Street.
So I have to tell you I am not going to waste my time sending this footage and others like it to Roadsafe.  I do not believe there is a ghost of a chance that they would prosecute.  They might send a letter to the registered keeper reasoning that education is all that is required.  However motorists do not breach ASLs when there is a police car behind them which indicates to me that they understand the law only too well.  Getting a letter reinforces the quite accurate perception that it is a breach of the law they can get away with.  Another reason not to send in such material is that the APPCG enquiry was told by the Metropolitan Police that they had assigned one officer to viewing these videos with a view to prosecution.  After one initial response when that officer was first appointed I have heard nothing in respect of the various films I have sent in where I have been endangered by incontrovertibly bad driving.  Enforcing ASLs is one thing the police could very easily do without any assistance from me and I will not depart from my practice which is to send them only the really bad (would clearly sustain a prosecution for careless driving) stuff.
Raising the issue of cyclists' contravention of the law in the way in which I have described is clearly a stock answer.  It is the one I was given when I spent a morning with the Cycle Task Force.  It is a revealing reflection of how trivial the police consider ASL offences by motorists that they intermingle it with the issue of cyclists crossing a first solid line.  Perhaps they think the absence of a feeder lane for cyclists means that no offence can be proved against the motorist but this would obviously not be so since the motorist is still crossing the line at red.  Perhaps this is the "it would not be fair to crack down on motorists unless we crack down even harder on cyclists" mentality.

In frustration,  I am resorting with increasing frequency to dismounting and pushing my bike over white lines in order to stay within the law but that is only an option if you know that the lights are not about to turn green.
So I shall not be acting on the police letter but I draw it to your attention so that you can do as you see fit.
Two very obvious improvements in the law though would be:
(a) Cyclists may pass the first stop line regardless of the colour of the light;
(b) It is illegal for a motorist to enter a cycle box unless his/her exit is clear (i.e. treat them as yellow boxes and without the right turn exception). 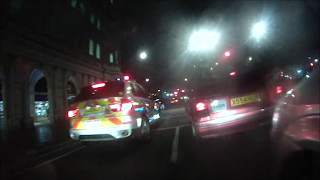