What's he yelling? Something about a cycle track

A finger stabbing gesture accompanies this man's expression of view that I should not be on the road; I should be on the cycle track.  His mate the driver obviously agrees, assuming he is in control of the horn.  To be fair, he did take the trouble to move over (a tiny bit) which differentiates this driver from the ones that try to squeeze me off the road.  As for the shouting, I am a lawyer who believes in free speech, however strongly I dissent from the view being expressed.

Here is the cycletrack alongside the A30 which they would like me to use.  It is, like most, cycling infrastructure completely unsuitable if you wish to get anywhere in anything approaching a hurry.  It is also built in either ignorance or defiance of all relevant design standards. 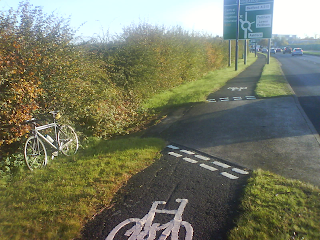 I used to use this track when I first started tentatively commuting by bike.  It took me at least 30 minutes longer than it does using the road, and with the numerous junctions and the requirement to give way to vehicles approaching from all directions, I was less safe.
There is though a pervasive attitude that cyclists should use cycle lanes, highlighted by the daft conviction of Daniel Cadden and the wishy-washy compromise wording in rule 61 of the Highway Code.  We were saved from even worse wording.  However it should read:
"Cycle Routes and Other Facilities.  Use of these facilities is not compulsory.  The choice as to whether to use them or not is yours and your decision will depend upon your level of experience and skills, as well as the prevailing traffic conditions."
I am all for optional segregated cycling facilities, but not for surrendering the general road network to the exclusive use of the motorist.  Motorists have motorways; when not on a Motorway they should share the road.
Posted by Martin Porter at 12:17