A young cyclist sets me thinking 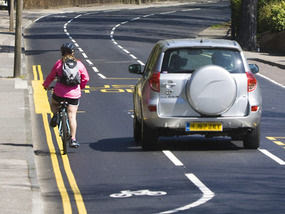 The controversial cycle lane in Poole
Coming in on the A30 this morning between Staines and Bedfont, I was passed on the inside by a young man on a bike dressed head to toe in black (save that his helmet was silver and black). He commented as he passed that he thought it looked as though I was about to turn right. An odd comment, I thought, as there were no right turns off that dual carriageway and I had certainly not signalled a right turn. He was referring to my road positioning and perhaps also to the fact that I spent a lot of time looking over my right shoulder at what was coming. Perhaps also he wondered at my propensity to move further right when I saw a vehicle coming up behind with no apparent intention of changing course or speed.

During the limited time available at the next light I tried to impress upon him the importance of being seen and he responded ‘yes, but there was carnage behind you’. I know, from my own observations, that those vehicles who look ahead have plenty of time to filter into the offside lane before passing me. The ‘carnage’ must be from those who passed him three vehicles (bike, car, car) abreast and then braked in front of him when they got to me.

I have nothing against the youngster; [subsequent edit:  I know him better now and really like him] our exchanges were perfectly friendly and I would defend his right to ride in the style and kit he chooses. What does concern me is that he does not apparently understand my style of riding. He is not the first fellow cyclist who has in effect suggested that I ‘keep in’. I would welcome intelligent debate on road positioning but often the ‘keep in’ stems from acceptance of an article of faith that (mere) bicycles should keep out of the way of (proper) traffic.

We are not all perfect and implicit criticism from a cyclist does cause me to reflect. I shall look into a bikeability training course since, though I have probably as much experience of riding on the roads as anyone, we are all capable of improvement. As Boris Johnson likes to point out the risks of being run down from behind are relatively low; but readers of this blog will know that riders do get run down by overtaking motor traffic on dual carriageways and the consequence when they are is often fatal. It is true too that the convenience of passing motorists is not very high on my list of priorities; but then when I am driving and passing a cyclist I put the safety of the cyclist well above my own convenience so I am being at least consistent.

I am a passionate believer that motorists should give cyclists plenty of room. On the A30 that cannot be done with two cars simultaneously passing a cyclist so I feel justified in claiming some road space to discourage it. I dislike the vast bulk of the cycling infrastructure in this country which consists of cycle lanes barely wider than a bicycle and which do nothing to encourage safe overtaking. When, at last, a cycle lane of suitable dimensions (pictured) is installed in Poole it receives widespread derision from motorists and their motor centric organisations and newspapers.

I am a ‘vehicular cyclist’. Realistically, I have to be given the distances I commute. Cycling infrastructure is of very limited, if any, use to me. I have not always been that way; I started commuting using cycle lanes painted on pavements; I then realised that the quality of the infrastructure I was using was such that I was much safer, as well as faster, on the roads; initially I kept well in and was often scared witless by close passing vehicles when I had nowhere to go; my final epiphany was reading John Franklin’s ‘Cyclecraft’ and I have felt rather safer since riding my bike as a vehicle entitled, like any other, to claim space on the road.

Cycling infrastructure though is essential to encourage others to cycle. I am persuaded in particular by this blogger (as convincing as he is prolific) that proper cycling infrastructure is required here of the quality that is widespread in Europe. Here we have generally the worst of all worlds with substantial money spent on a very poor infrastructure which appears to be designed to keep cyclists out of the way of cars rather than to make the cyclist’s journey smoother faster and safer. Who knows, if the infrastructure is really good I may use it, though I suspect I will want to continue to assert my right to use the road (a fear that this right may be eroded is the only reservation I have had about good infrastructure but this should be tackled by appropriate driver education).

For this election then I am looking for two things from any candidate who may attract my vote: support for road racing (see previous blog) and support for a proper cycling infrastructure designed by cyclists for cyclists with the aim of getting people out of cars and onto bikes. The rest of it: heavy taxation and spending cuts in order to get us out of the financial hole we are in, I take as a given from any future government.