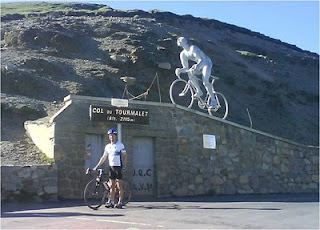 It is the Tourmalet for this year's etape and since I enjoyed it so much in 2008, I cannot resist doing it again on the 100th anniversary of its first inclusion in the Tour de France (when mountain roads were tracks, cyclists were superheroes and organisers were "assasins").

Time to begin some preparation then, which I shall sporadically chart on these pages.

This is one of the trickiest aspects of the etape.  The etape rules require a medical certificate stipulating that competitors are "fit to take part in cycling races".  Until recently production of a BC racing licence was an acceptable alternative, but the organisers have wised up to the fact that anybody can obtain such a licence and have become fed up with their ambulances, laid on for accidents, being increasingly filled with those whose cardiovascular systems were never likely to see them through a mountain stage.  A quick call to my GP surgery was met with news of a £100 fee to stamp my medical certificate.  This seems to me to be a little steep.  If I were unfit, unwell and a frequent attender at my GP, he would provide me with Med3 certificates indicating what I cannot do, all as part of the service.  Prevention is a lot better than cure.  Wouldn't it be great if certification of what we are fit to do was provided as part of the service constituting a small encouragement towards an active lifestyle steering us away from obesity, diabetes, heart disease and numerous other conditions that it would cost the NHS dear to treat?

The easy part then should be getting the miles in.  I was to start yesterday in a modest way with the Wycombe flat 50 reliability ride.  However for those of us who thought the thaw had arrived with the heavy rain on Saturday a real shock awaited.  The roads around Wycombe had indeed got very wet but then had frozen overnight.  I was one of many riders to come a cropper on the black ice and as I type I still have paraesthesia from elbow to finger tips and a square inch of skin missing from my hip.  The event has been postponed for a week as have my plans to get in some miles.

On the positive side, the Thames Velo team of 11 including me have had our entries accepted for the Fred Whitton Challenge in May and I have been using snowbound time to organise the club's Spanish Training trip in February.