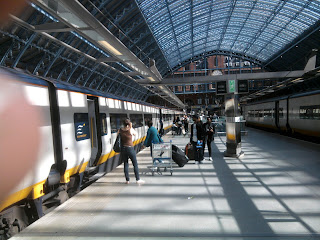 Throughout France on very similar trains there is no problem turning up and taking a boxed bike at no additional charge or hassle.  Eurostar are not (quite) alone.  I had planned to take my bicycle this year to Venice for the Grand Fondo Sportful.  However in response to my enquiries I was informed curtly that the sleeper from Paris to Venice does not take bicycles.  Again I had to pass my custom rather reluctantly to British Airways.
Posted by Martin Porter at 15:59