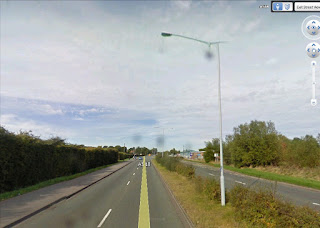 On Sunday 5th February 2012, at 1238 (broad daylight) Alan Mort was cycling along the A458 dual carriageway near Flint.  He was struck from behind by a Range Rover motor car driven by John Evans.  Sadly Mr Mort died of his injuries.
Today at Mold Crown Court Evans was convicted, on his plea of guilty, to causing death by dangerous driving.  Despite the fact that Mr Mort was in plain view of Evans for at least 20 seconds, Evans claimed not to have seen him before running him down.  Motorists behind expressed astonishment as Mr Mort was clearly visible to them.  He was said to be cycling in a straight line close to the kerb in a fluorescent jacket.  Mr Mort's rear light was found embedded in the front of Evans's Range Rover.  It is not clear from the BBC report whether the light was on but there is no particular reason why it should be in the middle of the day.
Evans was sentenced to 14 months imprisonment and disqualified for 18 months.
The Judge, His Honour Judge Niclas Parry, made some encouraging comments when sentencing Evans.

"He was there to be seen. He was immediately in front of you yet you collided with him"


"The use of the public roads by cyclists was probably now more enthusiastic (sic?)  than ever before, the danger to cyclists had never been under greater scrutiny, they were vulnerable road users.  Drivers have a high responsibility to be aware of cyclists on the road."
Encouragingly, there was no suggestion that cyclists should not be on dual carriageways, and the Judge's comments do suggest that the widespread concern over the needless loss of cyclists' lives is filtering down to Judges and to sentencing decisions.  There is yet further to go, however.  The sentence does continue to reflect the judiciary's continuing reluctance to disqualify obviously incompetent motorists for serious lengths of time.
It is hard to know whether to believe Evans when he says he did not see Mr Mort (would an aggressive motorist admit to having passed deliberately close in these circumstances?).  If true, it does emphasise that sadly kitting yourself out in hi-visibility kit is no substitute for positioning yourself on the road where you will be noticed.  There is no safety in riding close to the kerb in a straight line.  This does not attract the attention of the all too common inattentive driver.
None of this detracts from the obvious and complete culpability of Evans but we can improve the odds in our favour by taking the lane and not in placing our faith in the kit that we are so often urged to wear.