The numbers heading into the start pens in the grey dawn of that Sunday morning in Issoire did seem to be down on those at my previous etapes.  Up until now there had only really been a light drizzle and I had even felt slightly overdressed as I set out from my hotel in Parentignat 20 minutes earlier.  The organisers report that there were just 4,000 riders at the start and I can well imagine that with the dire forecast, if I had not come so far, I might well have decided to ride the route another day.  Looking around I was in a minority with covered knees and seemed to be alone in having covered fingers.
As we set off South towards the hills of the Massif Central, the rain became more steady and the roads more slippery.  I recall standing on the pedals close to the start to accelerate and the rear wheel slipping around.  At one point there was a large police presence and a cacophony of whistles at a railway crossing where every few seconds another rider would slide off.

At Massiac we turned right onto the first real climb and into a headwind.  As we got higher the wind blew harder and colder and the rain turned to sleet.  This is where I first saw riders heading back towards Issoire.  Initially I thought maybe they were going back to look for friends but then it dawned to me as this trickle turned to a steady stream that they had had enough and were going back either to Issoire or to find the broom wagon.  At the top of the climb was a long flat but the power of the headwind was sufficient to make it seem a steep uphill.  The short descent when it arrived was no relief as it was bitterly cold (the organisers say 4⁰C) and went down to the first feed station at Allanche.  Here many  were shivering violently and  did not appear to be in a fit state to continue.  The organisers were suggesting direct routes on to the finish at St Flour.

I persevered and started to warm somewhat on the ascent of the Col du Pas de Peyrol.  The rain had finally started to ease though the roads were still very wet.  On the descent of the Peyrol, the pros had come unstuck a week earlier in drier conditions.  The writing on the road ‘Vino Out’ at the point where the controversial Kazak rider had come off the road and broken his hip served as a reminder not to allow the speed to build up.  Every time I applied my brakes it took several seconds for the water to get squeezed out and for any force to appear to counter the acceleration due to gravity.  This was going to be a long slow day.


The road carried on up and down with no significant flat in between.   At some points you could see the riders ahead tacking up the mountain and then disappearing into the cloud.  At the top I was nearly knocked sideways by a massive crosswind before descending in cloud down the other side.  The little I could see of the scenery was breathtaking and on a clear day it must be quite stunning.  We entered a world of ski resorts which had fantastic roads where it was finally possible to pick up speed on descents because the roads were so wide and straight you did not need to think about braking. 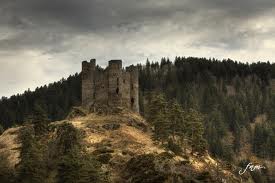 The Chateau d’Alleuze guards a deep valley but by the time I reached this point it was again pouring with rain dashing any hope of completing part of the ride, or arriving at the finish, dry.   As I passed the Chateau the sun did come out and cause the wet roads to steam but it was still raining heavily.  We carried on eventually arriving at a flat section where Johnny Hoogerland had been knocked flying into a barbed wire fence by the driver of a TV car. 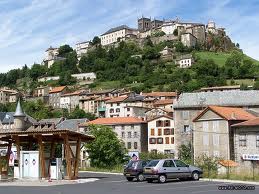 Finally with just a few kilometres to go, the rain stopped and the sun came out just in time for me to see Saint Flour perched spectacularly on the top of a rock with a smattering of buildings at the bottom that looked as though they may have fallen off the main town.  The sun had brought out spectators and there were hundreds of them cheering enthusiastically as we made the final ascent to the top of the town and the finish.


Apparently just 1982 people finished.  I took 10 hours of which I spent 9.5 hours moving.  The advertised limit was 12 hours and people were still finishing for a couple of hours after I had.  I heard subsequently that the organisers had brought forward the cut off times though I am not sure that it was not more a case of people by necessity taking much longer than would be usual, and the organisers being rigid in their adherence to times that would have given trouble to far fewer in better conditions.
I had had vague plans of riding back to my hotel in Parentignat but it was soon raining again and happily I found a lift with a couple from Kent.


Back at my family run hotel I had a huge plate of the local cheese.  They are very proud of their cheese round here with ample justification.  Sadly it is not available at my local Waitrose.
Posted by Martin Porter at 08:41