It is inevitable that as I keep posting my thoughts about cycling on this blog, somebody will disagree vehemently with what I am saying.  Disagreement has certainly been expressed by 'Phatboy' to this post which I penned after a motorist yet again told me to get off the road and onto a cycle track.
Phatboy starts:

"Seriously"
Alright.  I will take it that you are serious and this is not a windup from a friend.  It is rather reassuring that my blog is reaching out beyond the cycling die-hards to some of the people that need to be persuaded.  Perhaps Philip Hammond reads my blog too - I do hope so.

"the Highway Authority have provided a cycle lane well away from the traffic and you're still complaining?"
I am not complaining, I am explaining why I do not use the cycle track (not lane).

"What is wrong with this lane? It looks perfectly good to me, except that it leaves nowhere for pedestrians to walk."

I have mentioned in my blog the fact that the track does not comply with relevant design standards.  Check out the Department for Transport's Cycle Infrastructure Design Guidance here. This is, in my view, good guidance but it is scarcely ever implemented.  3 metres is the minimum acceptable width.  This track is just over one metre wide.  The track surface is  nothing like as good as the surface of the adjoining road.  The ends of the track deposit the cyclist the wrong side of multiple lanes of traffic to get onto the A315 and the position is worse coming from the other direction (the track is two-way, there is no similar provision on the other side of the road.)  Furthermore the track gives way at every junction.  The photograph in my post was taken to demonstrate, for a talk I gave a firm of solicitors, the low priority given to cyclists who are expected to give way to a hedge.  A cyclist has to slow even for this 'junction' because, if a motorist pulled over here to answer a mobile 'phone (say), and ran over the cyclist, he would be able to assert that the cyclist was obliged to give way.
And incidently look what happens just a few hundred metres West when you hit the Surrey border: 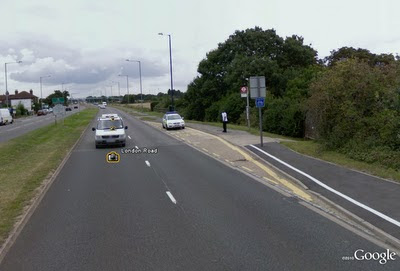 That blue sign says end of cycle route..I leave you to guess what the cyclist is to do next.  Any notion that this is Dutch style cyling infrastructure will not survive a quick inspection on google earth.

"Once you start paying road tax for your bicyle"
Not this one again!  Please refer to http://ipayroadtax.com/.  Both the road and the cycle track are funded from taxation.  I dare say I might pay more tax than you but that is not relevant.  Noone asks for your tax receipts when you visit the hospital or sign on for benefits.  I pay for the roads.  The sums you (and I because I have not managed to dispense with the use of a car) pay in Vehicle Excise Duty and fuel taxes are not hypothecated.  They are in any event trivial sums in comparison to the overall detrimental effect that a car culture has on our society in terms of death, injury, ill-health, noise, pollution, land use, climate change and ugliness.

"then I'll accept that you can get on your high (and very pompous) horse about who uses the road."

It is not unusual for people expressing views like those of Phatboy to mix in some personal abuse.  I am used to it.  It does nothing to advance the argument.  It is Phatboy, not I, who wishes to dictate who cannot use the general road network.

"By the way, if you're in a rush one morning, how about using a car or a motorbike rather than riding a push bike"
First, because it would make me a hypocrite.  I tell my colleagues who drive into Central London to work that their action is antisocial.  The last thing London needs is even more motorists.
Second a car is unquestionably slower.  Unless they turn off, I invariably catch and pass those vehicles who are in such a great rush to pass me.  A motorcycle may be faster but the inattention of motorists that currently frustrates me, would very likely kill me if I was travelling fast on a motorcycle.
Third, I enjoy riding a bike.  I do not enjoy driving.  It would be total bliss if I were not faced with aggressive and thoughtless driving on a daily basis.  If you have not tried cycling, then do.
If I am in a rush one morning, I take a train using a Brompton to get to and from the station.
What I find dispiriting is your assumption that those on bicycles have no business wanting to make good time whereas people in motor vehicles can 'rush'.  It is this double standard that lies behind the continuing prevalance of 'Cyclists Dismount' signs and systems which require cyclists to make unnecessary detours or wait for long periods at lights.  My return commute leaves me standing at red lights for 40 minutes.  this is because lights are phased for motor traffic, which can in any event avoid many lights by taking the Westway or Chiswick flyover or Hammersmith flyover etc not available to cyclists.
Some years ago I had a greviously injured client who had stepped into the road from a crowded pavement into the path of a car travelling at the 30mph speed limit.  The driver gave evidence that she ws travelling at 'the recommended speed' and that she saw no need to slow down because the pavements were crowded with pedestrians attending a festival.  A Court of Appeal Judge denied my application for permission to appeal stating that 'we all have to get around'.  Is it so unreasonable for cyclists to seek to make good progress too?  A cyclist at 20mph represents no significant hazard to anybody.  Aside from Portsmouth, motorists are still almost universally permitted to travel at 30 mph in built up areas, when it is well established that a 20 mph limit would save many lives.  Scandalously the Thames Valley Police will not enforce the few 20 mph limits in their area.
Attempts to enforce even the speed limits that we do have are characterised ludicrously as a 'war on motorists' (Mr Hammond are you still there?).  I already leave half an hour extra because I am butter fingered at fixing punctures.  I see no reason at all why I should allow a further half hour each way to negotiate cycle tracks instead of making good progress on the road.
Finally are you not able to appreciate that when I am on my bicycle leaving my (taxed!?) car in the garage, I am easing the traffic flow for the rest of you.  Richard Ballantine in his masterful 'Bicycle Book' suggests cyclists should be paid for cycling.  That will never happen but if you are going to measure your morality by narrow fiscal considerations, the motorist owes the cyclist not vice versa.

"in what looks like quite a fast road?"
The road has a 40 mph limit though this is regularly and routinely ignored.  It is perfectly suited to shared use.

Finally I have mentioned that I drive.  When driving, I have no difficulty whatever giving a car width space to cyclists when I overtake them.  Should they swerve for a pothole, wobble drunkenly or even fall off I would not run them down.  I do not bother to overtake a cyclist travelling around 20mph in a built up area or when I am about to turn; there is no point.  I always indicate and check my mirrors before I turn in case there is somebody there.  None of these things are difficult and none take more than a few seconds.  I remain at a total loss to understand what the likes of Phatboy have against sharing the road with cyclists.
Posted by Martin Porter at 09:16