In the criminal courts the treatment of those who have killed cyclists has remained patchy.  We all experience irrational road rage from time to time from motorists.  The unfortunate cyclist, Paul Webb, was deliberately run down by a motorist, Sean Fitzgerald, apparently in retaliation for a damaged wing mirror.  Mr Webb died of his injuries.  Fitzgerald claimed this was an accident.  Unhappily for Fitzgerald, but happily for justice, two workmen in a nearby driveway heard the engine noise followed by the collision and the jury rejected Fitzgerald's defence.  Fitzgerald was convicted of murder, sentenced to life and will serve a minimum of 13 years.  This is a first, so far as I am aware, of a murder conviction for a motorist who has run down a cyclist.  I have an uneasy feeling that Fitzgerald is far from the first, or last, motorist to attack a cyclist in this way but if the cyclist is dead, it is often difficult to challenge the motorist's version of events.


In my last update I described the fate of Katie Hart (who ran down and killed Major Gareth Rhys-Evans) and described her prison sentence as 'inevitable'.  It appears I need to revise my idea of what is inevitable.  Yesterday Georgina Mills walked free from Exeter Crown Court following her conviction of causing death by dangerous driving.  Last September she had run down two cyclists on the A30 in Tedburn St Mary.  The cyclists were on a long distance ride for charity and one of them, Simon Evans, died from his injuries.  Mills admitted the charge of causing death by dangerous driving (a factor that differentiates her case from Hart) and expressed remorse.  She was ordered to do unpaid community work and was (like Hart) disqualified from driving for just two years.
Mills had apparently been distracted for two seconds by a spider.  Presumably if you take your eyes off the road to deal with a spider you slow down, but even if Mills continued at 60 mph and hit the cyclists at the very end of the two seconds, she would have been only 53 metres from the pair when she first took her eyes off the road.  I do not know the precise location of the collision but Google Earth reveals this to be a straight wide dual carriageway. 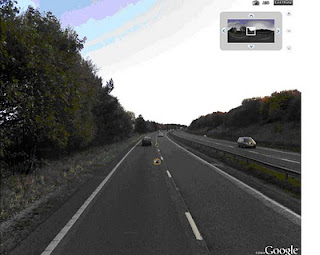 53 metres is certainly less distance than the nearest car is away in this Google Streetview.  It is not, in my view, very helpful to characterise this type of accident as 'momentary inattention' since that can be applied almost universally to road traffic collisions.  I strongly suspect that the cyclists must have been there to be seen before the motorist was distracted by the spider.  The underlying problem is that she did not take in, or react appropriately, to the presence of cyclists on the road.  The brain ought to have already started to process the achievement of the task ahead, namely to overtake two cyclists in a safe way.  Slowing and planning a move to the offside should already have been happening.  To add to the horror, the surviving cyclist was able to give evidence that both bicycles had been to the nearside of the rumble strip which, at least superficially, may appear to be the safest place to be.  This is wholly understandable and obviously no scintilla of blame could possibly be ascribed to the cyclists.  I have many times stated on these pages how I deal with dual carriageways

and sometimes those I am with (and certainly some motorists) think me mad - but I would rather the motorist's brain processed "What is that nutter doing in the middle of my lane?" than processed nothing at all.  Ultimately if the driver kept coming I would have been onto the grass verge.  There is no safety at the side of the road; some motorists will act as though you are not there and you cannot tell at the edge whether they are going to hit you or pass you until it is too late.
Of course this strategy requires looking behind almost more than looking ahead and is incompatible with Time Trialing.  It pains me to report that there has been yet another death of a Time Trialist, this time on the A419 dual carriageway near Swindon.  At about 7.45 pm on June 12th Alex Anderson was struck by a car and later that night died in hospital.  Traffic is reported to have been exceptionally light, perhaps due to a football match that England was playing at the time in South Africa.  I will be keeping an eye out for any proceedings that come out of this but make no further comment now.
In the civil courts there have been two recent cases of note.  In Kotula v EDF & others on 6th June 2010 HHJ Simon Brown (sitting as a deputy High Court Judge) gave a Judgment in favour of a cyclist who had suffered catastrophic injuries when he fell into the road under a lorry whilst trying to negotiate some poorly sited barriers erected by the Defendant companies around some roadworks on the pavement.  The Defendants alleged that Mr Kotula was partly to blame and, as part of their argument, asserted that he had been riding his bicycle unlawfully on the pavement.  The Judge found that Mr Kotula (a policeman incidentally) had probably been pushing his bike through the roadworks though he did habitually use the pavements for part of his commute.  However the Judge added:
"43. In my judgment, this piece of road was dangerous for all but the most experienced, traffic fast, confident and dominant of cyclists i.e. the „serious‟ cyclist as Mr Ibbotson [an expert witness] puts it, as opposed to the ordinary prudent cyclist using a cycle to go to work encumbered with his cycle rucksack.

44. In my judgment, although it is illegal for cyclists to use the pavement (unless it is specifically sanctioned by a local authority for shared use), when weighing up the danger to himself (cp danger to pedestrians) it was a reasonable decision by the Claimant to ride on the pavements in this area rather than the road in the context of the duty of care owed to himself to take reasonable care for his own safety whilst cycling. In my judgment, although illegal and potentially negligent in any action vis a vis a pedestrian, it was not “blameworthy” in terms of negligence in contributory negligence."

So there we have it, judicial confirmation that the facilities for cyclists are so poor that they can reasonably decide to travel illegally on the pavement.  I suspect Mr Kotula was wearing a helmet (because the report does not state otherwise) but there is also here further ammunition to use against those who argue that a cyclist is guilty of contributory negligence if he does not wear a helmet:

"50. In any event, even if contributory negligence had been established here, the relative culpability and causative potency of the alleged negligent acts of the Defendants and the Claimant under the principles in Davies v Swan Motor Co. (Swansea) Ltd. [1949] 2KB 291 were such that those of the Defendants were overwhelming: their negligence potentially threw users of the pavement into the path of vehicles on the carriageway; whereas the Claimant was rightly or wrongly using the pavement in the first place to try and avoid uncomfortable proximity with those very vehicles."

In the other civil case, which also came before HHJ Brown, the widow of Ninian Donald, claimed damages against the driver of a skip lorry that crushed Mr Donald as it turned left at traffic lights in Hackney in May 2007.  The Defendant accepted 75% of the blame for the accident and damages were agreed, and approved by the judge, on that basis.  This is a tragically common type of incident especially in London.  Interestingly at the inquest the investigating police had no hesitation in heaping the entirety of the blame on Mr Donald.
I have commented before on the adequacy of police and coroners' investigations into the deaths of cyclists.  Earlier this week I met up with a lot of lawyers, medics, bereaved and others interested in the legal investigations of death.  It strikes me that there is a hierarchy of deaths; sterling and thorough work (not least by Coroners) goes into the investigation of deaths in custody (including those detained by UK forces abroad), deaths of soldiers, deaths in the workplace.  The public funds, and rightly so, investigation and legal representation of the highest quality to take on such cases.  Typically those involved in the coronial system at this level are favourably impressed.  Relatives of the victims of Road Traffic Collisions are almost universally far less impressed.  My own explanation for this is that our society is car dominant.  Deaths in a factory or building site or an unnatural death whilst detained by the State are a disgrace and should not happen: deaths on the road, well that's the inevitable price we pay for enjoying our motor vehicles.  The unnatural violent death of any individual is equally important.  I wish we could move up the list of priorities at least those vulnerable road users who pay the ultimate price for taking up the Government's exhortations to walk or cycle.
Posted by Martin Porter at 12:50