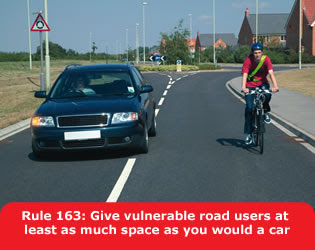 So, the Institute of Advanced Motoring is urging us to claim the lane, moving out into the middle of the lane when approaching junctions or parked cars.  Fair enough, it is the best place to be seen and to avoid being doored but why is this advice coming to us from the IAM?
Would they not be better directing their advice at their membership and other motorists, educating them that cyclists are entitled to the lane?  The rub, though, is in the less headline grabbing part of the organisation's advice; they suggest that other than at junctions a cyclist should be around 0.5m from the kerb and 'remember it is not always sensible or appropriate to take the centre of the lane especially if traffic is heavy.'  This is WRONG.  Rather than proffering advice to cyclists, the Institute should leave it to the experts like John Franklin author of 'Cyclecraft'.  A cyclist is at risk of not being seen on a straight road, riding 0.5m from the kerb is to invite the further risk of being seen but ignored.
The Highway Code advises motorists to leave vulnerable road users (that includes cyclists) at least as much room as a car, that's around 1.5m and that is the basis upon which the Government has rejected recent petitions for a mandatory passing distance.  In Spain legislation has been passed requring motorists to cross into the adjoining lane when overtaking cyclists and to allow 1.5m (Article 85 Código de la Circulación).  Here too, in all but the most exceptionally wide lanes, motor traffic should wait until the adjoining lane is clear before pulling out to overtake.  Hugging the kerb is only going to assist the motorist who tries to squeeze by in the same lane, not something to be encouraged.
Further, in a built up area the frequent switches from kerb to middle of the lane would put cyclists at additional unneccessary risk both from motorists and pedestrians.
It is perfectly appropriate to adopt a secondary road position (which I suggest should be around 1 metre from the kerb) in order to make an overtake easier for a following vehicle that has slowed and pulled out appropriately (and has thereby demonstrated that its driver has seen and reacted to the presence of the cyclist).  This may be regarded as a courtesy that assists us to rub along better, but should only be done if there is no risk to the cyclist's safety.
Although not a member of the IAM, I am a motorist and I have never ever been delayed more than about 30 seconds wating for an appropriate opportunity to overtake a cyclist or cyclists as though they were occupying the space of a car.
Many cyclists may prefer to keep well into the nearside, the road is after all a potentially intimidating place.  However for a motoring organisation to tell cyclists where they should ride strikes me as inappropriate.
Posted by Martin Porter at 20:27