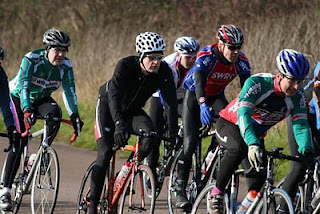 Lucy Collins's photos
A relatively gentle northerly wind and temperatures at around 6°C, milder than it has been for a long time. There were though noticeably fewer of us on the start line today so it was a lot easier to move up (and down) the field particularly with the tailwind on the back straight. The headwind on the finishing straight caused a bunching making passing much trickier. The 3rd cats did pass us this time but with the smaller fields in both races that went very smoothly.  There was some good tactical riding happening with a few attempts at breaks, though from where I was I could not see if the final break lasted to the end. I was still feeling sore and timid today and coasted around at the back for much of the time just aiming to finish comfortably within the bunch. This limited aim would have been achieved but there was again a crash on the finishing straight for which I had to brake hard. I hope those riders are ok. I saw that my fellow blogger Lance Woodman was doing a good ride today; he was up there ahead of the crash and is clearly regaining his form rapidly – I certainly couldn’t come close to catching him after I got around the crash.
Average speed 23.8 mph.
Posted by Martin Porter at 16:36